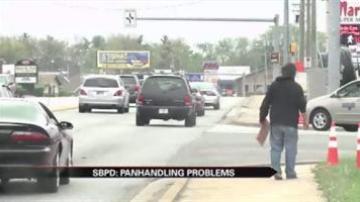 While The Center for the Homeless said they are trying to get panhandlers off of the corners, they said the majority refuse help.

If you drive through any busy intersection, chances are you will see someone with a sign asking for money.

“It’s tough because we’ve got people who are confronted at ATM machines and basically intimidated all the way to the folks who are just passively standing on the side of the road with a sign,” said South Bend Police Captain Phil Trent.

The Center for the Homeless Executive Director Steve Camilleri said either way, in most cases handouts don’t help.

“My strong sense is that these folks who are receiving the generosity of the community might not using it for what they say they need it for on the sign," said Camilleri.

He said he reaches out to panhandlers any time he sees them and invites them to the center, but often they aren’t interested.

“I offer our services and our help and I’ve just been turned down every single time,” Camilleri said.

In his experience he’s found that most panhandlers, unlike those living at his center, are not serious about improving their lives, but just interested in making a few quick bucks.

“The statistics show that a very small number, very small percentage of the folks out there doing it are homeless,” Captain Trent said.

The center said it is great to give, when you know exactly where your money will go, to a nonprofit that will help them end the cycle of panhandling.

“It’s just a better investment in that person and the community than just to give them some money and wonder where is that going to be used,” Camilleri said.

Police ask anyone to call and report any aggressive panhandlers, because depending on the situation it can be illegal.