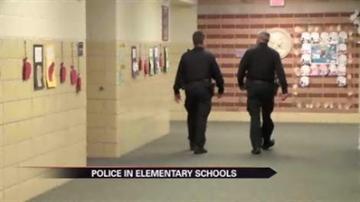 Jamita Maddox, mother of three, was horrified by what happened in Newtown Connecticut.

"I can recall that day as if it was yesterday. Even though I didn't have no natural kin-people there, that day was a very gloomy day,” said Maddox.

She immediately thought of her children, including her son who attends Benjamin Harrison Elementary School.

For law enforcement, the tragedy in Connecticut was not only gut wrenching but a serious cause for concern.

"A lot of things were running through my mind at the time and basically, one of them is; we don't have a lot of coverage at our primary centers,” said Lieutenant Eric Crittendon of the South Bend Police Department.

That's about to change.

"If we are really busy, I'll do a quick walk through. If we are slow I'll stay longer. So there is no set time in how long I'll be out here,” said Patrolman Terry Santa of the South Bend Police Department.

At schools like Benjamin Harrison, all that separates the students and staff from an attacker is a locked door.

An increased police presence can't hurt and it is not an entirely new concept for some officers.

"Some of the guys were doing it already. This just makes it more official and I think as we work like this, I think we'll be able to solve more problems in the community,” said Captain Darryl Boykins of the South Bend Police Department.

Parents say that even if there can't be a officer in every school, they are glad to see something being done.

"It's a start, and we have to start somewhere to show the world that we care about our tomorrow,” said Maddox.

Crittendon says the level of interaction between the patrol officers and the elementary students will be minimal.

Their primary concern will be the security of the building.