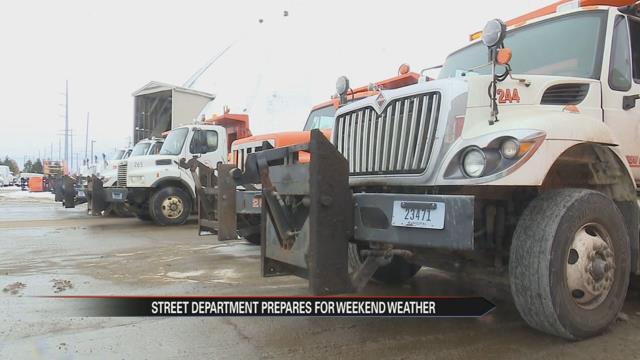 The South Bend street department is preparing for severe weather.

They are continuing to clear snow while waiting for more snow and possible freezing rain.

“We know we’re going to get hit with some additional snow and potentially some ice so preparing for that,” Derick Roberts, director of streets said.

Roberts says the main streets will be cleared first.

The challenge is, not only will there be snow on the ground, but most likely a layer of ice as well, making inclines slippery for drivers.

With single digit temperatures expected, sand and salt might not melt the ice.

“We’ll have approximately 26 trucks out all day, all night, just making sure we’re hitting all those hot spots,” Roberts said.

The street department can have staff on hand 24 hours a day.

This year, they took out cameras ahead of time, to find problem spots and get used to the new Smart Street routes.

“It is a different pattern. It’s something we had to shift up as we made our routes, but that hasn’t been much of an issue at all,” Roberts said.

Clearing snow while preparing for more is no easy task, but the street department is pulling out all the stops.