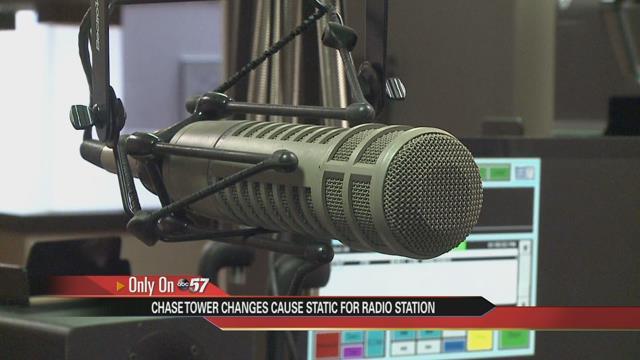 Changes at the Chase Tower in South Bend are causing static for a local radio station.

“We asked [the owner if the radio tower is interfering with anything] and they said no,” Barclay said. “[They said] it just wasn’t profitable for them to keep it up there.”

Barclay and her staff have been working around the clock since Friday, when they found about this, to gather support from listeners and city officials to keep Mix 106 on the air.

“I thought whoever bought the Chase building would want this to help South Bend locally,” Barclay said. “It doesn’t sound like that’s what’s going to happen.”

She says her station no longer controls how long it will stay on the air because an official from the company overseeing operations at the Chase Tower gave her vague details of the plan.

Gino Johnson, host of Mix 106’s “The Godfather Show,” said going off the air would hurt a lot of local businesses that work with the radio station.

“There’s a lot of mom and pop shops that do a lot of advertising with us that really can’t afford to go to a lot of other stations that are in this area,” Johnson said.

Mix 106 works with a number of local businesses, non-profits and schools, according to Barclay, and she doesn’t want that all to stop.

“My immediate goal is to try to get a contract and an agreement to keep our tower on the Chase building,” Barclay said.

The Mix 106 team is urging listeners and fans to contact their local councilman, the mayor and representatives at the company overseeing things at the Chase Tower – the Bradley Company.

Barclay said she is in contact with city officials and is hoping some type of deal can be worked out.