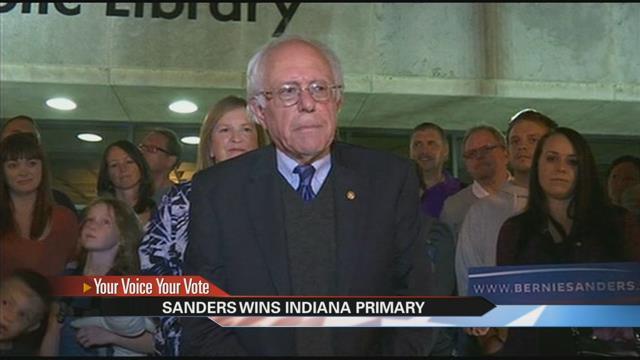 Hillary Clinton and Sanders were in a tight race for Indiana's Democratic delegates, but at 9:15 CNN projected Sanders' victory.

Indiana had 83 pledged Democratic delegates up for grabs, along with 9 superdelegates.

Many of them were grassroots supporters as they had campaigned for the senator since he announced he would run for President.

Supporter Tony Flores had the opportunity to introduce Sanders during his rally in South Bend on Sunday.

He believes many Hoosiers connected more with Sanders because of his unique message.

"I think that's what people are reacting to, are embracing and voting for, that it's time our country stood with working people and we could have a better America," said Flores.

In a blog, the mayor commended Sanders on his win but expressed the need for the Democratic party to unite.

"I like Bernie. In fact, I liked him long before it was cool," wrote the mayor. "But each passing day Democrats are divided will represent an advantage for Trump. And the GOP, against their preferences, their instincts, and even their values, will adjust their machine to do whatever they can to get him in, and keep Hillary Clinton out, of power.