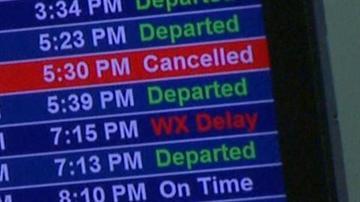 SOUTH BEND, Ind. – The Sunday following Thanksgiving is a day many travelers are using airports, and it is one of South Bend Regional’s busiest days of the year.

Whether it is by plane or by train, people are coming to and leaving from the airport. Only a few delays had to be suffered through this year, for both modes of transportation.

Michael Garcia from Osceola took the train from Chicago. He has ridden the train before and said it took an extra 20 minutes because of some delays.

Other travelers on their way back from a weekend in the Windy City said they were glad to be home after a long train ride with a screaming baby.

Inside the terminal a plane full of passengers returning from Las Vegas landed behind schedule. There was a delay in boarding the plane in Las Vegas, and another before it took off from Nevada.

For the most part, passengers on the jet were in good spirits as they waited more than 30 minutes for their luggage to show up at baggage pick-up.

But even the travelers that did take exception to the half-hour wait could not begin to compare their displeasure with that of Amber Harden from Johnstown, Pennsylvania.

Amber was visiting her father for the holidays. He lives in Michigan northwest of South Bend by about an hour and a half.

Her flight home to Pennsylvania was scheduled to leave early Sunday morning, and she was looking forward to having the rest of the day to relax after arriving home.

But, when she showed up at the airport, she found out her flight had been pushed back nearly 12 hours.

When she returned later in the day, she and many others boarded a plane headed to Detroit. It was supposed to leave at 5:30 p.m. but as they sat on the tarmac they were told there was a problem.

It was a maintenance issue that required fixing, according to Harden. She and the other passengers sat in the plane and waited for a while. “Apparently maintenance isn’t here on Sunday’s so they had to call somebody in,” said Harden.

That meant moving the passengers back inside the terminal to the gate. Once the mechanic arrived, they found out it would take three hours to fix the problem, and they would be on their way around 11:00 p.m.

That didn’t happen though. A short time later they cancelled Harden’s flight to Detroit because they did not have the part they needed to fix the plane.

We found Harden sitting on a bench waiting for a ride back to her father’s home in Michigan. She will try to get home again tomorrow.

Meanwhile, another passenger on Harden’s cancelled flight to Detroit was waiting as well. Lisa Thompson grew up in South Bend, and is going to college in Minneapolis, Minnesota.

She was flying to Detroit to catch a connecting flight to Minneapolis. She asked the Delta representative if she could just drive to Detroit and catch the connector and was told she could not.

Thompson is studying veterinary medicine and at 9:00 a.m. Monday morning she must start a clinical rotation or lose two weeks of schooling.

Her flight leaves first thing in the morning, and she has a fellow classmate picking her up from the airport. “As long as it’s on time, I’ll be okay,” said Thompson.

Despite these two bad experiences travelling during the holiday’s both Harden and Thompson said they would do it again. Flying is just far more convenient for Thompson; as for Harden, there is no other practical option.

Farther down the food chain of holiday travel, taxi cab drivers sat waiting patiently outside the terminal for fares.

Several told ABC 57 business was steady all day, Sunday. The majority of their passengers came from people using the South Shore Line for their transportation needs, according to cab drivers.