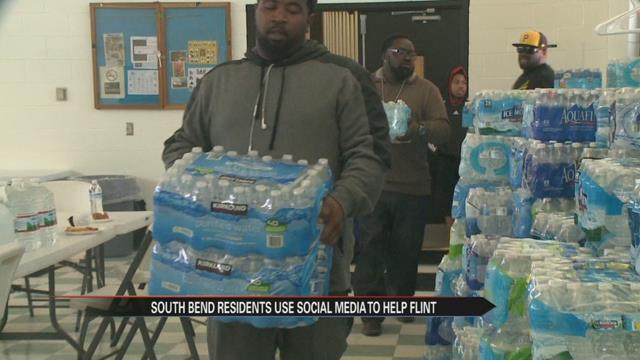 A Facebook status is all it took to get dozens of South Bend residents to come together and donate hundreds of bottles of water for Flint, MI.

“If we didn’t have social media, we wouldn’t even probably have this right now,” Dante Townsend said, standing next to a growing pile of cases of water. “This is all coming from everybody just posting on their social media sites and stuff.”

Townsend posted a simple Facebook status on Tuesday morning that read, “Who down to get a Uhaul fill it up with water bottles and take them to #Flint.”

Hundreds of bottles of clean drinking water will make their way from the Charles Black Recreation Center in South Bend to Flint, MI early next week.

“By Tuesday or Wednesday, we should have it in Flint,” Townsend said. “We already got the truck and everything. We just waiting for the truck and it’ll be gone.”

That Facebook status also helped connect Townsend with Nichole Thomas, who is running her own Flint water collection in Indianapolis.

“Two days ago, I was on Facebook, and on a mutual friend’s status I ran into Dante, and we linked up, and here we are,” Thomas said, as she helped coordinate the collection in South Bend.

The two are now working together to send both of their collections to Triumph Church in Flint, where clean water is hard to come by.

“The need is so bad in that community that they had a 52-ft. tractor-trailer dropped off yesterday, and the water’s already gone,” Thomas said.

The Charles Black Recreation Center in South Bend is normally closed Saturday, but program coordinator George Rogers wanted to help his friend, Townsend, so he opened the doors.

Townsend estimated more than 100 South Bend residents stopped by the recreation center Saturday afternoon to add to the collection.

“It started from a Facebook status and it just grew to this,” Townsend said.

It should be noted that Townsend and Thomas are not members of any formal organizations – they both said they’ve been watching the news coverage of Flint and they each wanted to help make a difference.

You can still drop off water at the Charles Black Recreation Center until the truck comes on Tuesday or Wednesday.

You can also donate to this fundraiser started by Thomas, who set it up in an effort to raise money to purchase even more water for Flint residents.