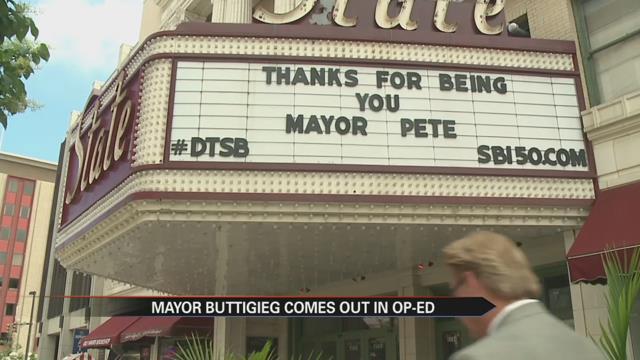 The mayor made the announcement Tuesday morning in a column he penned for the South Bend Tribune.

Brew Werks wanted to honor his courage by hosting a toast to Mayor Buttigieg.

It's a sentiment that was echoed all over the city and not just from the LGBT community.

Residents say they're happy he's finally able to be himself.

“I'm glad he was able to come out and be honest with himself and the community,” said resident Rachel Hall.

Hall says she supports the mayor because of his history of honesty with South Bend residents.

So when he came out Tuesday morning, she and other residents say they didn't see him any differently.

“Someone's sexual orientation should not play a role in the way that they do their job,” said Hall.

“I don't think that's got anything to do with him doing the job.” said resident Don Creed.

“I hope everybody realizes the sun came up today, I'm the exact same person I was yesterday.” said Mayor Buttigieg.

ABC 57 caught up with Mayor Buttigieg shortly after his announcement was published and he says he was ready to tell.

“I just thought it was the right time and everything I really have to say about it is right there in the op-ed” he said.

Also in the column, he revealed the moment he admitted his sexual orientation to himself, saying in part:

“I was well into my adulthood before I was prepared to acknowledge the simple fact that I am gay.”

That's an admission the LGBT community is applauding.

“I'm really proud of Mayor Pete for taking the step of coming out during pride month before the SCOTUS ruling and sharing who he is with the people of South Bend.” said Michael Lane, Board Member of the LGBT Resource Center of Michiana.