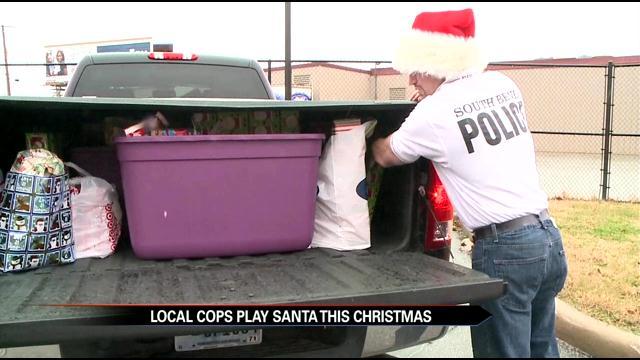 When thinking of the Christmas holiday, Santa delivering gifts to children is usually what comes to mind.

For the ninth year in a row, the South Bend police department is pulling out all the stops- with a bit of a Christmas miracle.

For families who, without them would not have had A Christmas morning, with gifts under their tree.

Cops are playing Santa for several families in need this season.

Detective Dave Beaty says,"The spirit of Christmas is the idea that these kids will be like any other, and Santa will remember them at Christmas time and that there will be presents for them to open in the morning.

Ruth Clark, the Grandmother of five says, she did not think her Grand kids were going to have much to open this year.

This was not the Clark's first encounter with South Bend police.

The police department remembers families at this time of year that they had come in contact with during the year.

Families that officers meet in schools or on the streets from calls cops have taken, often negative experiences for children.

These cops do more than just bring gifts, cookies, and meals, officer Beaty found a dryer and even installing it for a family.

The Department spent about five thousand dollars, but they say it was more than worth it.