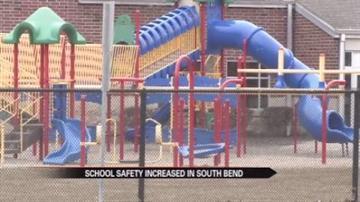 SOUTH BEND, Ind. -- The South Bend School Corporation is beefing up security at Muessel Primary, after a retired teacher was robbed at gunpoint outside the school last Thursday.

Police have caught the armed suspect.  It is a fifteen-year-old male who was already being held at the Juvenile Justice Center for another crime committed after this robbery.

It has been less than a week since a retired teacher and volunteer at Muessel Primary was robbed at gunpoint.

"We are using the video, however we do also have some strong witnesses, strong circumstantial evidence and some physical evidence; the gun," said Captain Trent.

While parents were at ease by the capture of the gunman, they say other issues at the school also put their kids in danger.

"I was looking towards the school and I saw that there were cops out there and the kids got home from school and told me someone broke the windows while the students were in school," said Beatriz Hernandez.

But now, that has all changed. The South Bend School Corporation decided to step up safety measures.

"I saw that they are putting cameras over there at the other side of the school," said Hernandez.

Those safety measures include a larger police presence during and after school hours, an upgraded video security system, and window break sensors in every classroom on the first floor.

These are measures Hernandez says are well worth it to ensure her three little girls are safe while learning at school.

The fifteen year-old suspect has not yet been formally charged.