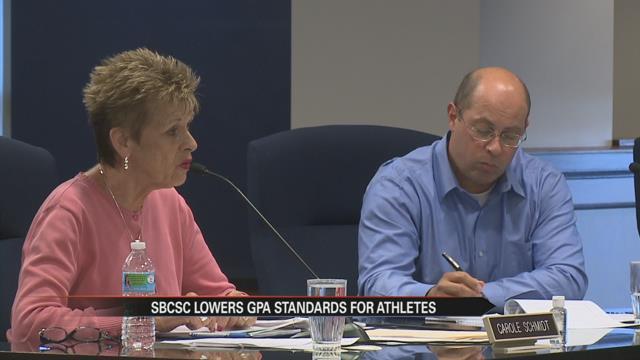 After weeks of backlash from the community, the South Bend Community School Corporation (SBCSC) approved a controversial proposal that would lower academic requirements for student athletes in the district.

Many residents from the community voiced their opinions at Monday’s school board meeting. Not all of them were happy with the board’s decision.

Student athletes will now get a break from the previous GPA requirement, at least until their senior year in high school, but this also is a promise of reestablishing a valuable resource for these students many say the district has overlooked for years.

“The big thing that I'm happy about is the study tables,” said parent Drew Danik.

Danik was one of many parents relieved to hear the return of mandatory study tables for struggling student athletes.

“Anytime there is enrichment involved, I think that you can really get kids to open up and be creative,” said parent Leslie Wesley.

The return of that policy was a major concern for members of South Bend Community School Corporation’s Board of Trustees, but was overshadowed by Monday night’s public forum on the controversial GPA proposal.

“A lot of people would like to see the 2-0 remain," said Danik. "The board has spoken, they made  their vote, and hopefully down the line some other things will be added to it.”

Under the approved proposal, high school students would have to maintain a standard slightly above the statewide requirement.

High school seniors however, would still be expected to have 2.0 GPA.

“It’s a privilege not a right," said board member Bill Sniadecki.

Sniadecki voted against the proposal saying these standards are too low.

“They need to have some incentive,” he said.

But those behind the proposal say these students need some help.

“I think we need to give kids hope,” said Wesley.

Sniadecki and at-large trustee Maritza Robles voted against the proposal.