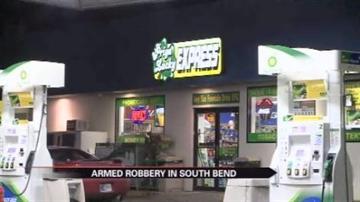 It happened around midnight near the intersection of West Western Avenue and Mayflower, and police are still searching for the suspect.

A store worker, who declined an on-camera interview says the robber put a handgun on the counter and said "give me all the money."

The worker says he listened, but also hit a button underneath the counter to alert police.

He says the robber insisted he was taking too much time, and cocked his gun back, while asking the man to hand him the money faster.

Police say they think the robber might have had an escape route planned, and someone waiting in a getaway car outside. They will be looking at surveillance video later today.