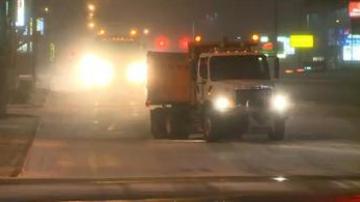 SOUTH BEND, Ind. -- The city's Street Department was out in full force on New Year's Day. They prepared all day for a major storm headed towards Michiana.

It was a night Greg Brucker had been waiting months for.

"Seems a little abnormal to me, we usually have some snow by now,” said Brucker, General Foreman of the South Bend Street Department.

And soon we will, a lot of it, which means Brucker and his crews will be busy tonight.

"We do the best we can with what we got and we make it work,” said Brucker.

With 25 trucks on the road Sunday night, Brucker was watching the weather closely from a variety of sources including websites like ours.

"Every half hour to an hour, I’m looking at that and making a determination on what the weather is doing,” said Brucker.

His big concern was the high winds. He said they are going to make things really difficult.

"If we get as heavy as snow as is being predicted by Tuesday morning, with upwards to 14 inches, with these 20-30 mile an hour winds, that makes it tough," said Brucker.

The toughest spots for his crews to keep clear will be in the northwest part of town around Nimitz Parkway and Cleveland Road.

"We try hard to keep those areas open especially the industrial parks because we want people to be able to do their business. If we are closing businesses because we can't keep a street open, that makes it tough on them, and the economy is tough enough as it is right now," said Brucker.

That's something Brucker isn't about to let happen.