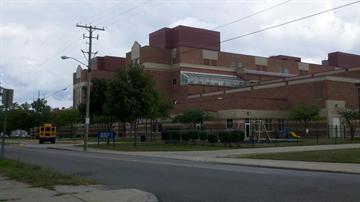 The attack happened at 2:45 p.m., around the time classes dismiss for the day.

The victim was a 15-year-old girl.  From the report, it appears that she knew her attacker -- a 16-year-old boy -- and that they were acquaintances.

The girl's mother brought her in to the high school on Wednesday.  This is where they reported the attack to police.

After talking to police, she was taken to the hospital to be checked out.

The case has been turned over to the Special Victims Unit.

The school and police say that this report is still under investigation.

Reports will be turned over to the Prosecutor's Office.  From there, they will decide what charges will be filed and whether or not the attacker will be tried as an adult.

This is in no way related to why Principle Edward Bradford was placed on paid administrative leave.  He has been on leave since Wednesday.