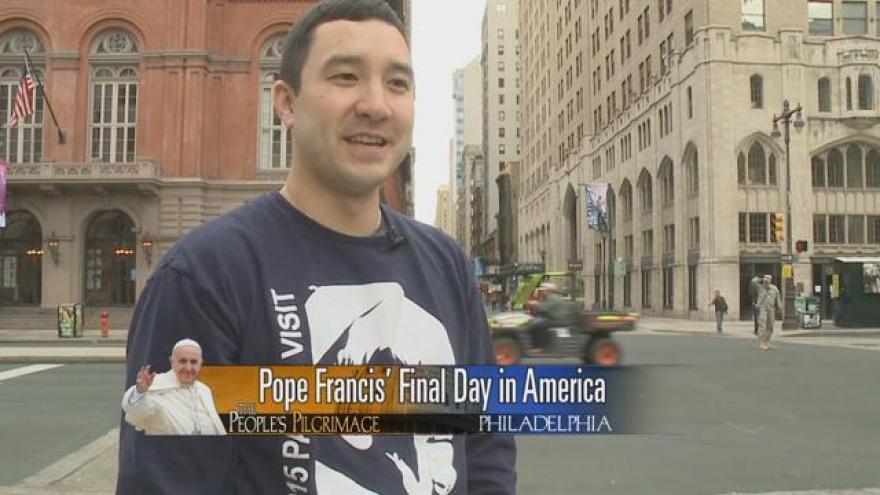 The group of South Bend students who traveled to see Pope Francis in Philadelphia arrived at 7 a.m. Sunday morning. The students are tired after sleeping on the bus, but are excited for Sunday afternoon's mass.

The group of 500 students from Notre Dame, Holy Cross, and Saint Mary's arrived in Philadelphia at 7:15 a.m. Sunday.

"Good. Good. As good as an overnight bus trip can be, but it was a lot of fun. We had just a few stops along the way most of the buses watched movies. Most of the buses prayed the rosary at some point too and just tried to get some rest as well as we could," said Lichon.

Lichon says the students immediately felt the energy of the city.

"The subway stations were high fiving people as you walk by and there was just a great energy in the city today," said Lichon.

The students had a few hours after arrival to spend some time before the mass.

"The students will be wandering. They can go where they want to. Some are headed over to see the Liberty Bell some are going to go find a cheese steak. Some of them are going to go straight to their spot and stake out a good spot for the mass," said Lichon.

The group had t shirts made - and with a lot of them running around Philadelphia with the shirts on, they are really representing the south bend community.

Only 15 students have tickets to the papal mass at 4 p.m.

The rest will watch from the non-ticketed area and will watch Pope Francis on a huge screen.