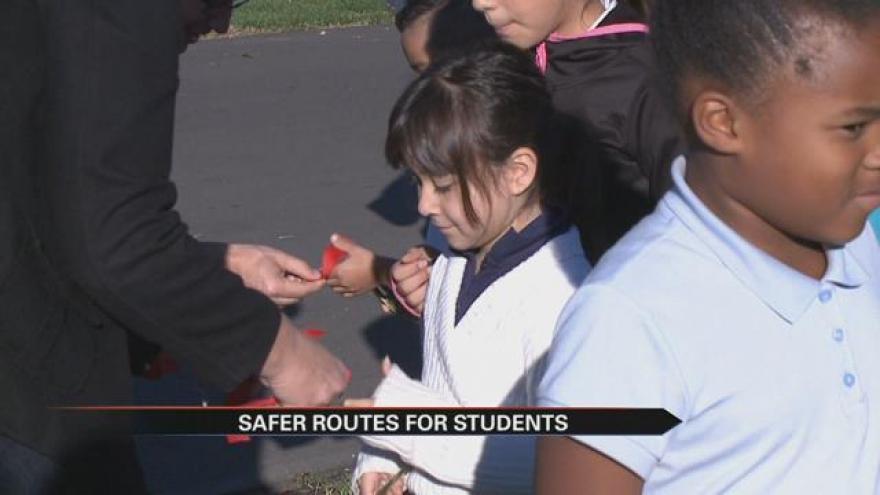 Some young South Bend students now have safer routes to school and it’s all because of a class project they initiated in the Spring of 2015. Now over a year later, their effort is a reality.

“We have more students that are walking to school than in the past,” said Karban. “They’re utilizing these safe routes that were put in place for them.”

This 18-month project was possible thanks to the efforts of the students.

“They made a better sidewalk and all the people in the whole wide world is sad,” said Ja’Quan a third grader.

“I do know that my students were instrumental in asking for stop signs and asking for sidewalks,” says Karban.

Mayor Pete Buttigieg says a sidewalk might not come to mind when thinking about public health, but it’s actually really important.

“This is literally concrete example of what public health looks like in our community,” explained the mayor.

Teachers like Calya Kedik are also thankful for the upgrades. “I feel more comfortable sending my kids home, that walk home,” she said.

And staff like engineer Marteve Gray, says this new sidewalk will be easier to maintain.

“It'll be easier for me to remove snow with flat sidewalks I don’t have to worry about damaging my equipment or vehicles,” said Gray.

The mayor says he has big hopes for the future of south bend schools.

“We’re hoping to extend this to Lincoln, Monroe, Studebaker and hopefully more where that came from in future years,” said Mayor Pete.

He says every year they will be applying for more funds to get the safe routes to schools project in more neighborhoods.

Although Mayor Pete thinks this is a great move toward public health, there’s something else of value in this project. Teaching children they can trust the government and see hard work paying off.

“You asked and we listened. That’s how government is supposed to work. You want the kids to have these experiences, to raise an issue, the government listens and we find the resources to deliver,” said Mayor Pete.