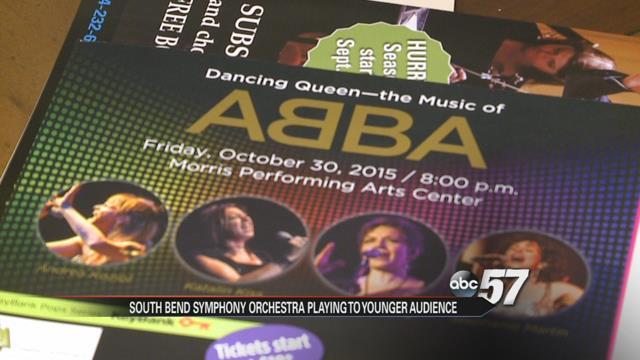 The South Bend Symphony Orchestra has a long history in the community. They are in the 83rd season as an organization and each year they perform about 17 concerts.

Friday the 30th will kick off the first of three Keybank Pop Series Concerts that will take place this concert season.

It is called Dancing Queen-- The Music of ABBA. ABBA is a 1970's Swedish pop group. A couple of their well-known songs include Dancing Queen and Mamma Mia. Symphony organizers hope that this concert will bring in the younger crowd.

“We’ve seen our concert goers range from early twenties, and we’ve seen well beyond that. It’s a great opportunity for a wide audience to enjoy the type of music that’s going to be played with our pop series,” said Ryan Matthys, South Bend Symphony Orchestra Board President.

The Pop Series concerts will be a little different than the traditional classical concerts.

Rakhmatullauev began her tenure as the new Executive Director September 28. Her goal is to make the symphony the main Michiana Symphony.

"My hope and goal for this organization is that we become the South Bend's symphony. We become the symphony of the Michiana region and then we reflect that in everything that we do," she said.

She also wants to further use social media platforms and create programming for the symphony's music to reach a more diverse range of ears.

“As orchestras I do feel like we have the responsibility of embracing the technology and embracing the changes of our century and finding ways to cooperate with those existing technologies to make our concerts and programs more appealing,” she added.

For more information on the upcoming concert, click here.