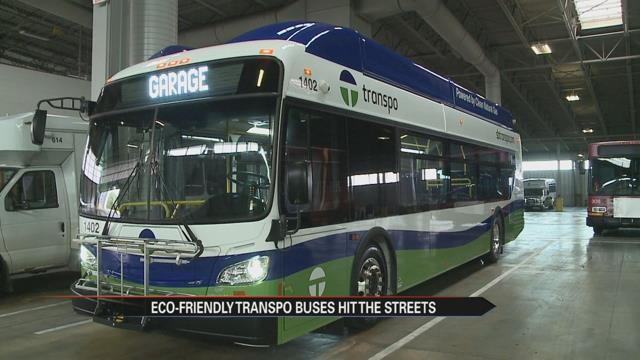 The South Bend TRANSPO released more of their new buses into full-time service this past month. They first debuted some of them during the city's 150th birthday celebration.

“We used the SB-150 opportunity to debut the new buses. Not only was it a great way to celebrate our city’s birthday, but it was a great way to introduce the new TRANSPO look," said TRANSPO General Manager David Cangany.

However, it has taken longer for all 16 of the new buses to be put into service because there is extensive training that operators and mechanics have to go through before putting them on the streets.

“We wanted to make sure that our workforce was well prepared not only on the maintenance side because there’s a lot of maintenance changes with the vehicle that’s 11 years newer,” Cangany added.

The new line is more eco-friendly than the previous line of buses.

“Vehicles are powered by compressed natural gas which is much less polluting. We’re saving quite a bit of money by moving over to this technology but at the same time we’re helping our community,” he said of the new ones.

Compressed natural gas is less expensive than diesel fuel which has previously been used. Cangany said their fuel budget is down $300,000 by switching to this type of fuel.

He said they are also quieter and have a new braking system. Additionally there is added signage on the back of the bus to show people from behind where the bus is going.

For TRANSPO mechanic Tony Garrett, he said this makes his job a lot more efficient.

“Our repair time is cut basically in half just because the buses are just new. A new bus makes our job a lot easier," said Garrett.

This is something that the crew is excited about.

“It’s been something that our work force is really excited about to not only drive a vehicle that’s brand new but to make sure when they get out there, they’re continuing to provide the right service," said Cangany.

At this time there are 10 of the 16 new buses already in service. As they continue to train the staff, the remaining will be put into service. Monday the TRANSPO board will meet to discuss their long-term five year plan that will involve costs for new buses as well as the plan to continue to replace the fleet.