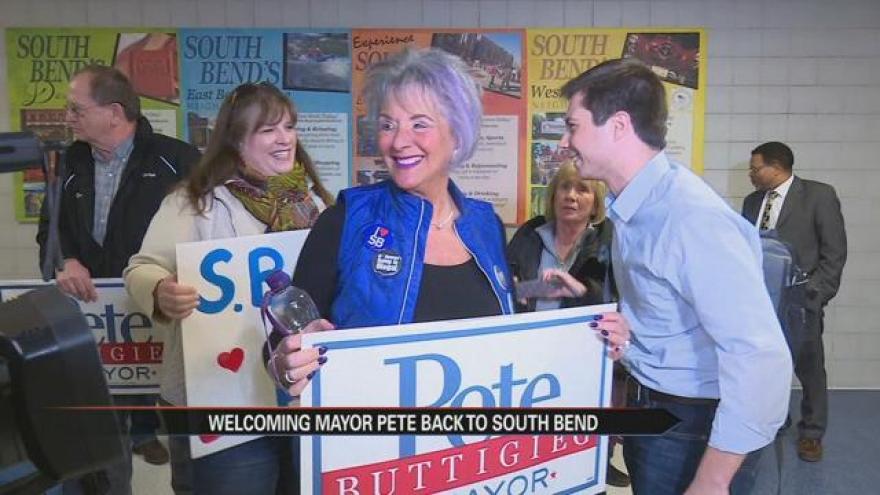 Mayor Pete Buttigieg is back in South Bend after bowing out of the race for DNC chair. More than 50 of his supporters welcomed him home at the South Bend International Airport Sunday.

“We couldn’t believe our ears. We just sat there in shock. A lot of tears and lots of emotion, but nothing but proud. I mean, we couldn’t help but be proud,” said lifelong South Bend resident, Jody Freid.

Freid traveled all the way to Atlanta and back Saturday to support Mayor Pete.

“Pete done a great job showcasing his skills and his dynamic leadership that he’s brought to South Bend, so he definitely shined for us,” said District 7 State Representative, Joe Taylor.

“To tell you the truth, when I heard that he was running for DNC chair, I had mixed feelings, because I was happy for him, and it was exciting, but I wanted to see him stay in South Bend, too, so I’m excited to see him come back home,” said one of Mayor Pete’s supporters, Zach Stewart.

“It’s not just about me, I think it’s a sense of people’s pride in where the community is going, and their pride that somebody from the community was talking about our city’s life on a national stage, and I felt like I was carrying that with me everywhere I went, and it was a real wind at my back,” said Mayor Pete Buttigieg.

Now that the DNC race is behind him, he and his supporters are looking forward to the future.

“You know the only job I’m going to be thinking about right now is the job of mayor of South Bend and throwing myself back into that work,” said Mayor Pete.

“He’s going to come home and set his sights on the future and do great things for not just South Bend, but I believe for the party,” said Joe Taylor.

“There are people who already say to me, Pete for 2020, but again, whatever he wants to do, I’m there for him,” said Jody Freid.