South Bend woman recovering after being shot in the head 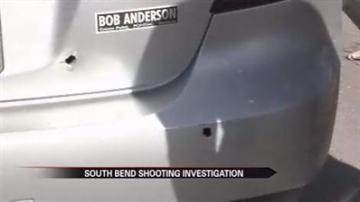 SOUTH BEND, Ind. -- A South Bend woman is recovering after she was shot in head while her three kids were in the car.  Police say this happened on the corner of Eddy Street and Colfax Avenue Wednesday evening.

Police say the victim, Michelle Brown, is lucky to have survived because the bullet hit the skin on the back of her head, but didn’t puncture her skull.

She had surgery at Memorial Hospital to remove the bullet and is expected to make a full recovery.

“They came out here fighting and they pulled out a gun and shot the young lady with her kids in the car,” said Tonisha Horston.

Horston says she was just minding her own business when a fight escalated outside of her home.

“They were actually just moving their clothes and probably about an hour later they came in the back about four or five cars kind of deep,” said Horston.

Police say the fight began near the intersection of Colfax Avenue and Eddy Street outside of the apartment complex and ended with one woman getting shot in the head through her back window while her three children were in the car.

Glass was shattered all over the apartment complex parking lot along with the church parking lot next door.

Horston says she can’t pinpoint exactly why the fight began, but says she knew the two groups of people shooting didn’t get along.

“We were actually at a bar one week and they got into it with the young lady and they rolled off on it like they don’t have time for this,” said Horston.

But Horston says regardless, the shooters deserve to be locked up for taking the confrontation to such a violent level.

“You need to lock them up for good.  They do not even need to step one foot on earth.  If I was the judge, I’m putting them up under the bus,” said Horston.

Police and Brown’s family say Michelle Brown is a mother of three and a teacher’s aide at Madison School.  They say she was dropping off her children’s father and was an innocent victim.