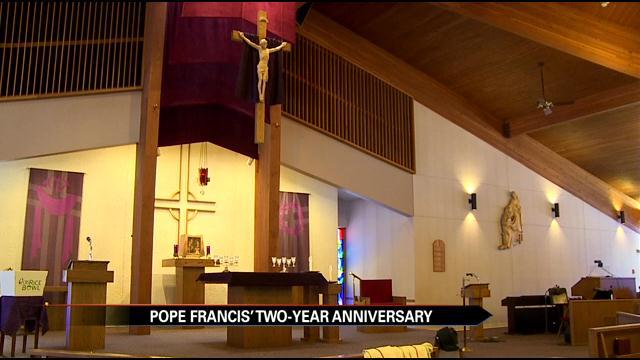 South Bend's Catholic community reflects on the future of the faith on this second anniversary.

But according to Pope Francis, he might not have many more anniversaries.

Only two years into his tenure, Pope Francis speculates he could follow Pope Benedict's lead within the next three or five years, and retire before he passes.

But before he decides to take on the role as the world's second Pope Emeritus ever, South Bend's Diocese reflects on his impact today.

A few members of Corpus Christi Parish came in to pray throughout the day.

Some were unaware of the anniversary but said Francis' popularity and influence helped changed the public's perception of Catholicism.

“Pope Francis is certainly one who maintains the teachings and traditions of the church and yet at the same time he's always encouraging people to look at things in a new light,” said Father Daryl Rybicki of Corpus Christi.

Once viewed as traditional, the Vatican is now more accepting, according to Fr. Rybicki.

And the Pope's example of humility is spreading through the faith.

“He encourages priests and bishops and other ministers to not be so aloof and so insulated in their own little world that they're missing out on the others and that's very big for him,”said Father Rybicki.

Fr. Rybicki also says if Francis feels the church could be better served by someone younger and more energetic, he would support his decision to step down.

Pope Francis was 76 when he was elected.