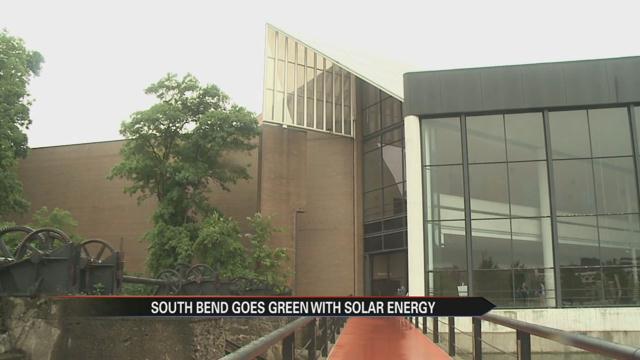 The city of South Bend is looking to go green.

The city was hoping to soon harvest hydro-electric energy and Tuesday, Mayor Pete Buttigieg laid out the details of a new grant the city received that will help push solar energy.

The Century Center currently has the highest utility bill and energy demand in the city.

But that’s just a start.

“We’re really just at the beginning of unlocking what this could bring to our community,” said Mayor Buttigieg.

The center could be the key to unlocking alternative energy resources.

Tuesday morning’s dreary weather didn’t put a damper on the city’s green announcement that would involve this roof, already under construction.

Solar power is just one way the city is looking to run more efficiently.

South Bend is also looking to extract hydro-electric power from the river.

“We have this amazing river that has always powered an industry in the past now there’s an opportunity to use it to power the future,” said Mayor Buttigieg.

Significant additions that are in line with the city’s promise to make South Bend greener.

“If we can use one less kilowatt hour to light a room or to heat a building that’s just as good as finding a new way to get that energy,” said Mayor Buttigieg.

The popular river lights that were installed are LED, which means they use less energy.