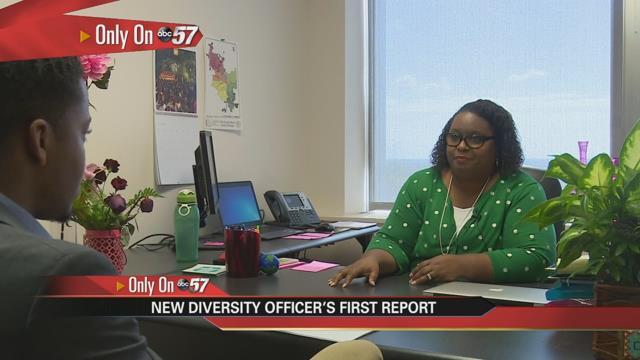 South Bend is looking to promote and expand diversity throughout its ranks, but the city will have to take a hard look at what it’s not doing first.

This week, the city’s diversity and inclusion officer filed a preliminary diversity report showing where the city is today.

“I really want to make sure that we put some meat on the bones of the executive order that was released by the mayor back in January,” said Christina Brooks, the city’s diversity and inclusion officer.

That was a priority for Brooks the day she was announced as the city’s new diversity and inclusion officer.

Just two weeks into her new role, she’s already taking a hard look at what needs to be done in order to get there.

“I’ve had an opportunity over the past couple of weeks to first have some one-on-one discussions with department leadership,” said Brooks.

Those discussions raised challenges and highlights in each department she outlined in this 10-page report.

“Those are typically the areas you focus on,” said Brooks. “We could kind of get a baseline from their perspective.”

With 1,069 city workers under at least 11 departments, she saw the personnel as a major area in need of improvement.

“It was very clear that we do have some challenges here when it comes to diversity in our workforce,” she said.

But she saw great strength in the city’s outreach efforts.

“Some of the existing outreach programs here with the city are very well known throughout not just South Bend, but the region,” said Brooks.

Brooks says this report is just preliminary and her next duty will be putting together an action plan that includes detailed data.

“We’re doing somethings right but there are definitely some things that can be improved upon,” she said.