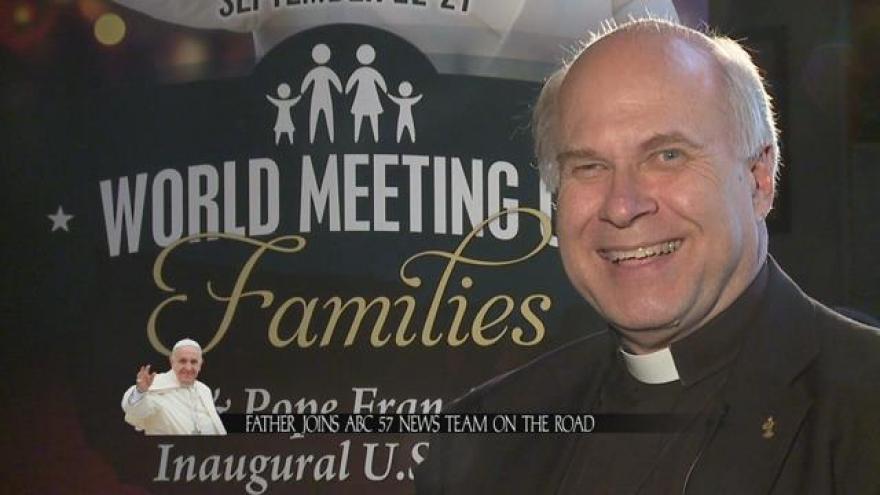 Father Daryl Rybicki will travel with ABC 57 as a special religious correspondent for Pope Francis' visit to the United States. It's a lot of responsibility that comes straight from his heart.

"I think there's a real sense, as you look out into the congregation, these are my people, these are my flock and I have a spiritual responsibly towards these people," Father Rybicki said.

Father Rybicki's flock, his people, are at Corpus Christi Church in South Bend.

He has spent 37 years working as a pastor for the Catholic Diocese of Fort Wayne South Bend in various roles.

For one week he's leaving his altar at Corpus Christi to lend his voice to all of Michiana by accompanying ABC57 to Washington D.C. and Philadelphia to cover Pope Francis' visit.

"In some ways I see this as a tremendous to be able to engage in getting out that word and perhaps in a somewhat unconventional status as far as someone may associate somebody who is a pastor," Father Rybicki said.

Unconventional, but meaningful as he serves as an expert in the Catholic faith to break down all of the messages and images from the Pope's visit.

"In many ways and I think this is the Holy Father's mission as well. The role of a pastor. any pastor in any church, The role of the pastor is to be an instrument for the spiritual growth of their parishioners, the members of their congregation," Father Rybicki said.

He will draw on his past experiences.

Over the years he has attended papal visits.

He even met Pope John Paul II one on one.

"I had an opportunity to meet him on 3 different occasions. The first was 15-20 minutes with him, my mother and I were in Rome at the time and we were privileged to be there," Father Rybicki said.

A privilege that has shaped his experience as a holy figure.

"It certainly was uplifting because he was such a formidable figure, a world figure a church figure and yet such a gentle and down to earth pastoral figure," Father Rybicki said.

An experience that will be passed along to ABC 57 viewers live during Pope Francis' historic visit.