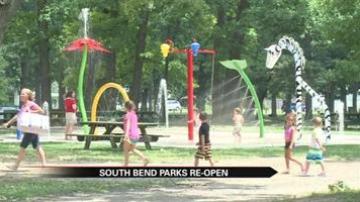 SOUTH BEND, Ind. -- The South Bend Parks Department has been working hard to get several of the city's parks reopened. Several had damage from the storms that came through early Tuesday morning, July 1st.

Over the weekend, crews cleaned up more than 100 trees at Howard, Potawatomi and Muessel Grove parks.

Those three parks have reopened, but Keller Park remains closed.

The damage at Keller Park is so bad, it will take at least another week to clean up the debris.

“We’ve seen much bigger storms in the streets in the past since I’ve been doing this, but as far as the park is concerned, this is probably the worst that I’ve seen it," said Mike Dyszkiewicz , Maintenance Superintendent.

If you have storm debris to be picked up, the city asks homeowners to leave it near the curb. It will be picked up the week of July 14-18.

South Bend residents can drop off branches and other yard waste, free of charge, to the city’s Organic Resources facility, 4340 Trade Drive, between 8:00 a.m. and 4:00 p.m. Monday-Friday.

The fee will be suspended for South Bend residents only through July 18. You must have proof of city residency.