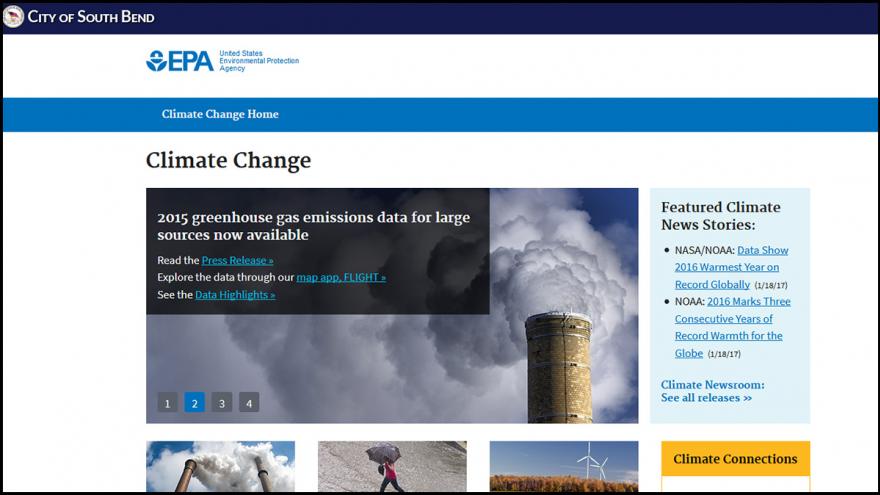 The City of South Bend has posted an archive of the EPA's climate change data and information on the city's website.

"Since the administration has suppressed the presentation of climate change data on the EPA website, the City of South Bend will host an archive of the site on our own servers. Thanks to the City of Chicago for leading the way on keeping this information available."

The EPA site was scrubbed of climate change data in April.

In the press release announcing changes to the EPA website, JP Freire, Associate Administrator for Public Affairs was quoted,

“As EPA renews its commitment to human health and clean air, land, and water, our website needs to reflect the views of the leadership of the agency. We want to eliminate confusion by removing outdated language first and making room to discuss how we’re protecting the environment and human health by partnering with states and working within the law.”

The City of South Bend's EPA Climate Change archive can be found by clicking here.

On June 2, Mayor Buttigieg announced the city would join the Mayor's National Climate Action Agenda after President Donald Trump announced the United States would withdraw from the Paris climate accord.

The Mayor's statement in the press release mentioned the city's investment in sustainable practices and reducing any negative impact on the environment.

“South Bend has already been directly affected by climate change. Meanwhile, renewable energy and green infrastructure industries are already creating jobs here. Withdrawing from Paris would hurt our community and our economy. Since President Trump has decided that America will no longer lead on this issue, South Bend will join cities and states around the country to continue addressing climate change, even if it means leaving Washington behind. South Bend has already pursued sustainable practices such as investment in energy efficient buildings, renewable energy, LED lighting, alternative fuels for our vehicle fleet, and keeping yard waste out of landfills. Moving forward, we will engage with local partners and with national efforts like the Mayors’ National Climate Action Agenda. I call on our leaders in Washington to courageously outline a path to a stable climate. But we will no longer wait on Washington for leadership. Cities can lead on climate change, and South Bend will be among them.”