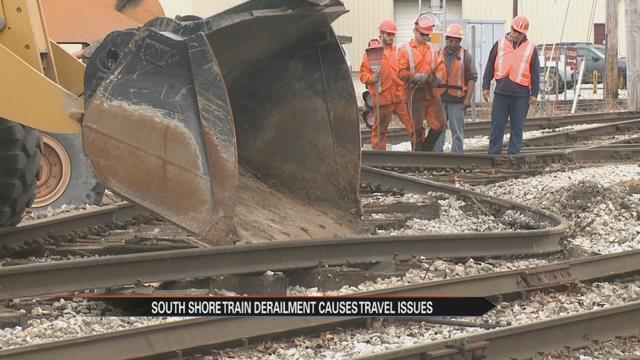 A train derailment in Michigan City Saturday morning left South Shore Line users without a way to get to Chicago for the St. Patrick’s Day Parade.

“Saint Patrick’s Day is one of our busiest days and one of the worst days that this could happen,” Northern Indiana Commuter Transportation District (NICTD) Superintendent Jay Goodrich said.

According to NICTD, more than 9,600 people used the South Shore Line on St. Patrick’s Day Weekend last year to travel to and from Chicago.

“They came out of the [train] yard and naturally, as you see, they derailed,” Goodrich said. “And at that time, we suspended service until we could get the re-railment.”

All South Shore Line trains are stored in Michigan City, so the accident brought things to a complete halt.

The train that derailed was starting its trip to South Bend, where it would pick up riders on their way to Chicago. On Saturday, many people were heading into the city to see the Chicago St. Patrick’s Day Parade.

“It was an eight-car train,” Goodrich said. “Three cars derailed, one car completely off [the tracks], the other ones had a set of trucks off.”

The derailment left a large section of track needing to be replaced, along with what’s called a catenary pole, which looks like a utility pole, and helps energize the train.

The pole was nearly knocked over during the derailment.

Dozens of workers swarmed the scene Saturday to get things back up and running.

In South Bend, an Amtrak representative said four times as many people showed up to take the train to Chicago Saturday morning because of the South Shore derailment.

Back in Michigan City, the crew members on board the train were evaluated and screened for alcohol or drugs – normal protocol for an incident like this, according to Goodrich.

“I had one conductor and one engineer on board,” Goodrich said, adding they were both uninjured.

What’s left now is figuring out what went wrong.

“It’s a preliminary investigation right now,” Goodrich said. “We’ll have a full investigation once everything is cleared up, and at that time, we’ll ascertain exactly what happened.”

A press release sent out just before 5 p.m. Saturday stated service was restored and that a westbound South Shore Line train was expected to leave South Bend on time at 5:45 p.m. ET, en route to Chicago.

The release also stated service for eastbound trains would resume from Chicago at 9:15 p.m. CT and full weekend service was expected for Sunday, March 13.

*Photos used in this piece were shot by Bruce Stahl*