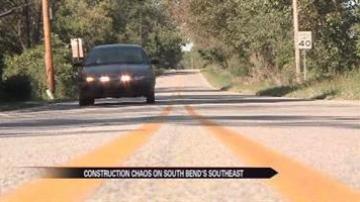 SOUTH BEND, Ind. -- For the last few weeks, Shari McNeill has been woken up by something other than her alarm clock.

"It's usually about seven o'clock in the morning, and they go until five," said McNeill. "It's constant noise."

She lives along Kern Road where construction has been taking place sine late July.

The Indiana Department of Transportation is hoping to improve infrastructure along U.S. 31; allowing drivers a quicker, and hopefully safer, route to Indianapolis.

"The real issue is the safety aspect," said Matt Deitchley, a spokesperson for INDOT. "It's going to be a lot safer of a road. It's a limited access highway, so you won't have people turning left on U.S. 31, while you're driving along."

Deitchley said he understands the inconvenience felt by neighbors.

The detour around the construction is three miles.

For folks like McNeill and her husband, driving that everday is starting to add up.

"My husband works not even two-and-a-half miles away. He comes home for lunch, and he's seeing the increase in cost," said McNeill.

But the cost of gas is the least of concerns for people living in the Whispering Hills suburb.

Drivers are cutting through and doing almost double the speed limit.

"I understand it," Ken Kaucic, said a resident of the suburb. "I just wish they were a lot more cautious, and treated it like their neighborhood."