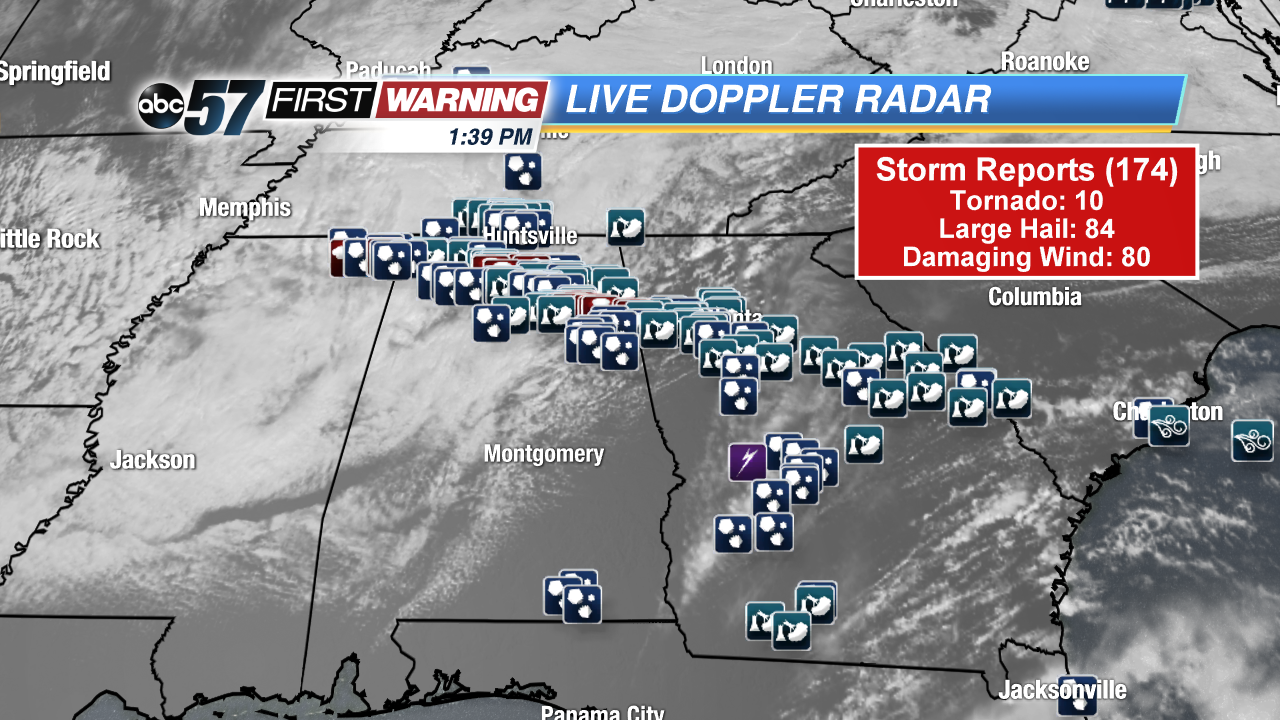 Storm reports from Monday & Tuesday
It was a rocky Monday and early Tuesday morning across parts of the Southeast as severe weather rolled through the region. A strong March storm system spawned strong to severe storms that affected parts of Mississippi, Alabama, Tennessee, Georgia, and South Carolina. As of 1 PM Tuesday, there were a total of 174 severe weather reports. That includes tornadoes, wind damage and large hail. As time progresses and as the National Weather Service conducts storm surveys, there will likely be more storm reports added to the list. 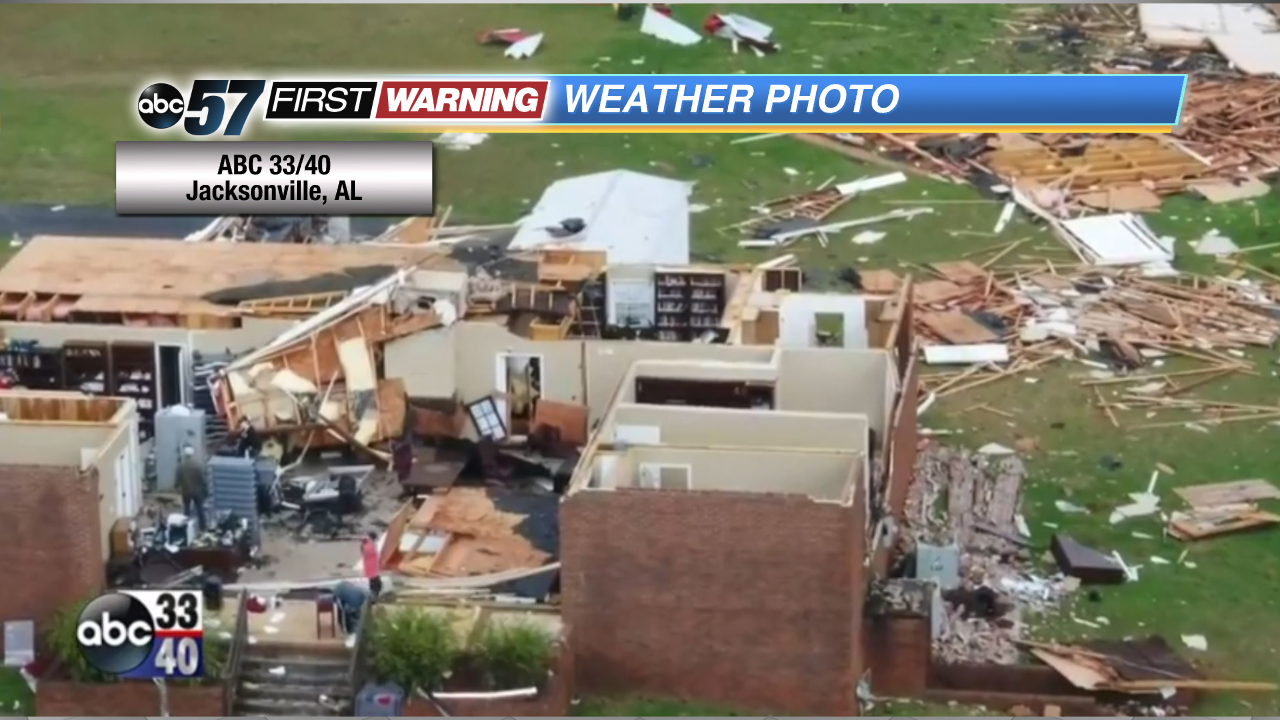 Jacksonville, Alabama storm damage ABC 33/40
The environment across parts of the South was very supportive of dangerous thunderstorms. That was especially true for northern Alabama, which was the hardest hit area. Nearly all of the tornado reports came from the northern third of the state. The City of Jacksonville was hit very hard by what the National Weather Service called a "damaging and possibly large tornado" when issuing a warning Monday evening. The storm survey of that very storm has confirmed a massive EF3 tornado struck the area. Jacksonville State University -- located just north of downtown -- saw major structural damage to apartments, dorms, campus buildings, and other buildings nearby, as a result of the likely tornado. In fact, as of 3 PM Tuesday, the Mayor of Jacksonville says the campus is completely off-limits to the public. 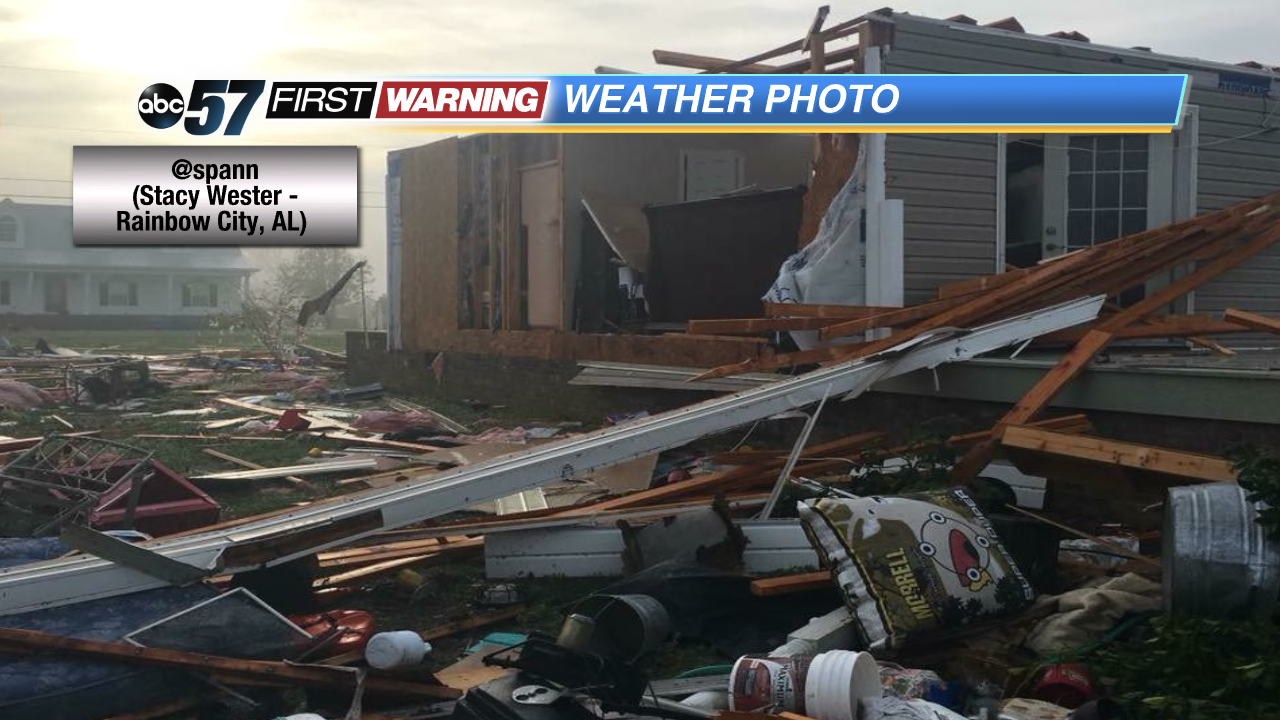 Storm damage in Rainbow City, Alabama
Other areas hit by likely tornadoes include parts of Cullman, Franklin, Limestone, Morgan, Etowah, Calhoun, and Cleburne Counties. Tornadoes weren't the only severe weather hazard to severely impact parts of the Southeast, though. As the storms rolled through, there were numerous incidents of extremely large hail to the size of baseballs and even softballs. Picture thousands of hailstones of roughly 2.5-3.5" in diameter falling for several minutes onto your home and vehicle! That's what many northern Alabamans experienced.

While the tornadoes produced the most structural damage, the hail produced significant damage to numerous vehicles, homes and other buildings across northern Mississippi, Alabama and Georgia. The hail was so large and fell so heavily that it even fell right through the roof and ceiling of one man's home.

Thankfully the pattern looks quiet for the remainder of the workweek. That will allow storm surveys to be completed, as well as damage clean-up to be conducted.