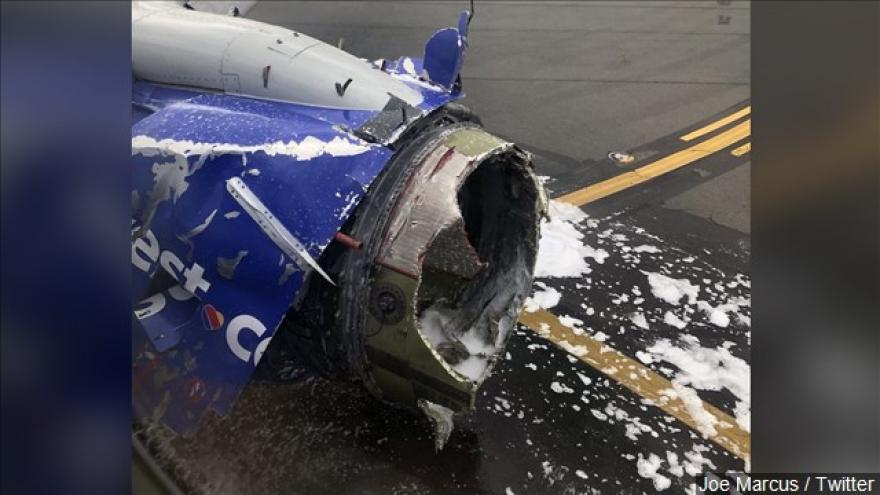 (CNN) -- Some passengers aboard Southwest Airlines Flight 1380 received a $5,000 check after a deadly engine failure that led to an emergency landing in Philadelphia.

The jet's engine failed Tuesday about 20 minutes into its flight from New York City to Dallas. Debris from the engine blew out a window, causing passenger Jennifer Riordan to almost get sucked out of the plane.

Passengers dragged her back into the cabin, but she died at a Philadelphia hospital after the plane made an emergency landing.

In a letter to passengers, the airline expressed "sincere apologies" for the fatal incident and included the check, said Kamau Siwatu, who was aboard the flight. He was one of at least three passengers who said they received the letter.

"We value you as our customer and hope you will allow us another opportunity to restore your confidence in Southwest as the airline you can count on for your travel needs," Siwatu's letter said. "In this spirit, we are sending you a check in the amount of $5,000 to cover any of your immediate financial needs."

In addition to the money, passengers will receive a $1,000 travel voucher, the letter said.

It's not unusual for airlines to give passengers money in such situations, according to CNN transportation analyst Mary Schiavo. "It gets money in the hands of people that need it for counseling or something," Schiavo said.

CNN has reached out to Southwest Airlines for comment, but has not heard back.

The plane's engine had undergone a visual inspection two days before, the airline said.

The National Transportation Safety Board is finishing up its initial examination into the deadly engine failure -- but many questions remain unanswered.

It's unclear why the left engine of the flight malfunctioned when the plane was over 32,000 feet.

"I know people would want answers right away. We would do a very methodical investigation," NTSB chairman Robert Sumwalt said. "Right now, we just want to document everything that we can."

In the search for answers, federal officials have interviewed pilots, examined the damaged engine and collected video footage from passengers who lived through those 22 minutes of chaos. They've also recovered the airplane's cockpit voice recorder and flight data recorder, and are still tracking down debris from the engine.

The NTSB will look into how an interior crack on a fan blade led to the engine failure. Sumwalt said the crack was not detectable from the outside. One of the cracks was consistent with metal fatigue, he said.