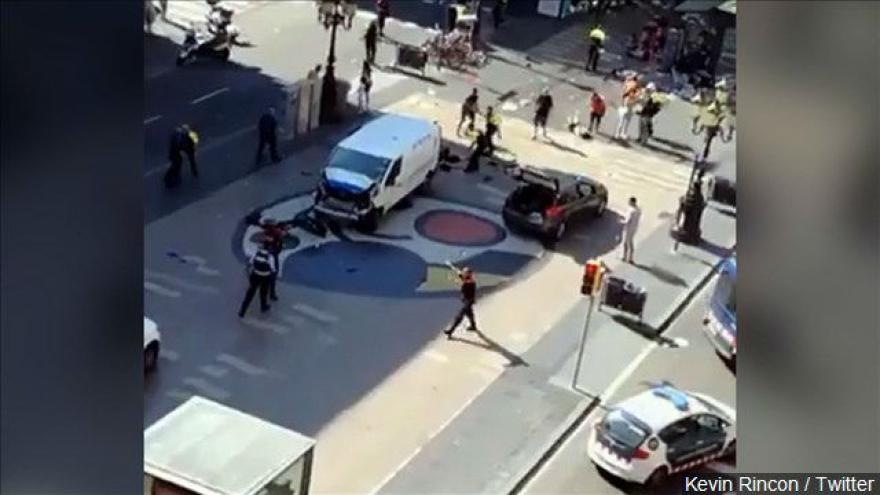 (CNN) -- The Spanish region of Catalonia has been rattled by two terror attacks and an explosion over three days, in what authorities are treating as a trio of linked incidents.

Three men have been arrested, but the driver of the deadliest attack -- a van ramming in Barcelona, which killed 14 people-- is still at large.

Of the men arrested, one is Moroccan and another is from Spain's North African enclave of Melilla, Reuters reports.

- In the early hours of Friday morning, five armed attackers drive through a crowd of people in the town of Cambrils, 75 miles southwest of Barcelona.

- One person killed and six others injured, including one police officer.

- Police engage in a shootout with the attackers and kill all five.

- A white van plows into pedestrians at around 5 p.m. on Las Ramblas, the city's busiest tourist promenade.

- At least 14 people are killed and more than 100 injured in the country's deadliest attack since the 2004 Madrid bombings.

- The driver of the van flees on foot and is believed to be still at large.

- People from at least 24 countries are among the injured, according to officials. A Belgian is among the 13 people dead.

- A second van, believed to be linked to the Barcelona van, is found in Vic, a town 43 miles from Barcelona, according to Reuters. A driver runs over two police officers at a security checkpoint, causing them minor injuries. It is unclear whether this is terrorism-related.

- Two suspects are arrested in the towns of Ripoll and Alcanar, but neither are the driver of the Barcelona van.

- ISIS claims the Barcelona attack through its media wing, but offers no evidence supporting the claim.

- Just after 11 p.m., the fire brigade is alerted to an explosion in a house in Alcanar, a city about 100 miles southwest of Barcelona.

- One person is confirmed killed and seven others are injured.

- Officials have not confirmed the cause of the explosion.

- Police say the victim killed is a Spanish national and was not on police radar.

- Officials say the house collapsed completely and caused serious damage to the façade of the house next door.

- Of the three people arrested so far, one was detained in Alcanar and the other two in Ripoll.