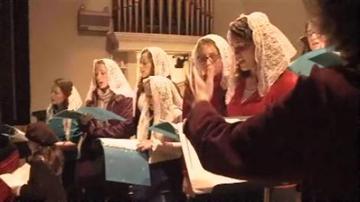 SOUTH BEND, Ind. -- While many are waking up to go to church this Christmas, some already did their Christmas worshiping.

A special midnight service was held in Saint Patrick's Cathedral in South Bend, it was illuminated by candles, and in Latin.

Like Policinski, many other church-goers we spoke to say they make it to this mass in particular each year. They say it is unlike anyone they ever go to.

"The mass they do here is a tradition Latin mass. So think of it as a way they did mass before Vatican 2 up until the 1960's. It's more traditional, they use Latin, more like the ancient form of the mass" said Policinski.

Latin speaking and chanting came from the priest and people sitting in pews; and music was sung loudly for all to hear.

"I think it's good for their soul. I think its not just the Catholic mass but Jewish or Christian" said Jeri Tobolski.

Everyone at the mass seemed to be in good spirits, ready to celebrate their religion, and try to make the best of the rest of the year and one to come.

"I want to wish them a merry Christmas and a happy new year and maybe if they have the chance to go to church" said Tobolski.