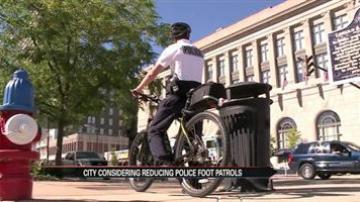 SOUTH BEND, Ind. -- The city of South Bend is cutting $150,000 from its budget by eliminating the special police patrols in downtown. Downtown business owners don't want the city to get rid of the foot and bike patrols.

South Bend Common Council President Derek Dieter says the downtown foot and bike patrols are the best use of overtime hours to solve a problem that he has ever seen.

Now, with that solution in jeopardy, he is letting everyone know the administration's plans.

Having police officers on foot and on bikes has worked out well for revitalizing South Bend's downtown image.

"It's been a fantastic thing for the area, a tremendous boost for the businesses," said Dieter.

It has helped businesses like Idle Hours Book Shop; which has been downtown for more than a decade.

"Even just the work they've done so far, you can see an improvement in the downtown area," said Josi Doyle, owner of Idle Hours Book Shop.

But now the city administration is looking to save some money on the police budget and is looking to cut out the foot and bike patrols starting next year.

"When I asked the Chief Teachman and Mark Neal, they confirmed that there will not be any more of those patrols," said Dieter.

That didn't sit well with many of the downtown business owners.

"We like the police presence downtown. It made everybody feel more safe and secure," said Doyle.

Phil Schreiber the owner of Chicory Cafe understands the administration's desire to save a few bucks, even if he doesn't fully agree with the decision.

"Having the presence downtown is nice. It's important. If it doesn't work, they take it out of the budget, and something happens, we'll see it back in the budget and we'll see that again," said Schreiber.

That's something Dieter is trying to avoid having to do altogether.

"I'm not voting for the budget because that's one of the reasons. This patrol needs to continue," said Dieter.

Dieter plans to retire from the police department early next year.

He says there will still be a beat car that will drive through the area, but it won't be able to service this part of town like the bikes and foot patrols can.