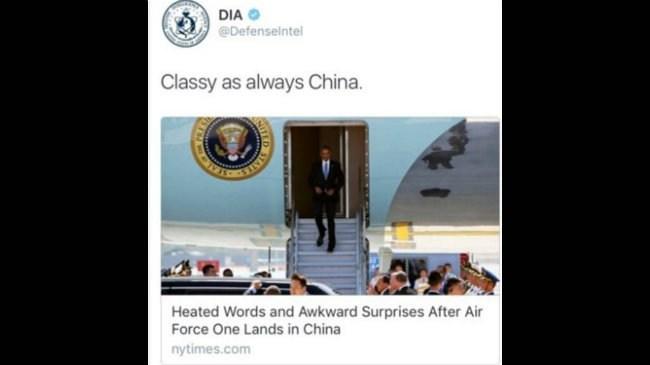 WASHINGTON (CNN) -- A United States spy agency is apologizing for a tweet that jabbed at China over its treatment of American reporters who had traveled with President Barack Obama to cover the G20 meeting there.

The Pentagon-housed spy agency on Sunday apologized, tweeting: "Earlier today, a tweet regarding a news article was mistakenly posted from this account & does not represent the views of DIA. We apologize."

The initial tweet, which has since been deleted, included a link to a New York Times report about a dust-up over security protocols at the tarmac when Obama landed in China -- and later, shouting matches between Chinese officials and Secret Service agents at the West Lake State House, where Obama met Chinese President Xi Jinping.

The tiffs were largely over American journalists' access to Obama. Chinese officials unexpectedly limited reporters' access to the President.

The first incident occurred when a Chinese official demanded that a group of reporters traveling with Obama be ushered away from Air Force One, according to pool reports. When a White House official responded that it was the United States' president and plane and that the press wasn't moving, the man shouted back: "This is our country."

Later, at the West Lake State House, White House aides, protocol officers and Secret Service agents spent 15 minutes arguing with Chinese officials over which, and how many, Americans would be allowed in -- an exchange that left one security official looking ready to throw a punch.

"Calm down please. Calm down," a White House official said.

A foreign ministry official said in Chinese: "Stop, please. There are reporters here."

It was the first of two disputes between American and Chinese officials there. The second, minutes later, was over how many American journalists would be allowed in the room when Obama, Jinping and United Nations Secretary General Ban Ki-moon met. The Chinese insisted on limits that left two US reporters unable to enter the room, despite one White House press officer pleading: "There's space. They are print reporters. They would just be just standing."

Asked about the airport kerfuffle after a Sunday morning meeting with British Prime Minister Theresa May, Obama acknowledged to reporters that "the seams are showing a little more than usual in terms of some of the negotiations and jostling that takes place behind the scenes."

"I wouldn't over-crank the significance of it, because, as I said, this is not the first time that these things happened," Obama said. "And it doesn't just happen here. It happens in a lot of places, including, by the way, sometimes, our allies. Part of it is we also have a much bigger footprint than a lot of other countries. And we've got a lot of planes and a lot of helicopters and a lot of cars and a lot of guys, and if you're a host country, sometimes it may feel a little bit much."

Oliver Janney contributed to this report.