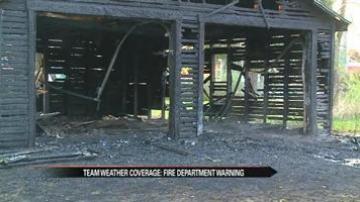 SOUTH BEND, Ind.--Fire crews responded to a call from a neighbor on South Saint Joseph Street, only to find a vacant garage completely up in flames. The initial report states the cause of the fire is undetermined, but the battalion chief on the scene said he's seen this situation before.

Battalion Chief Carl Buchanon said most likely people lit a fire trying to keep warm, but it quickly got out of control.

“They start a fire by any means necessary, realizing that fire doesn’t just stay in one particular place, it kind of spreads,” said Buchanon of the South Bend Fire Department.

The colder it gets, the more calls firefighters respond to like this one. The 9-1-1 caller worried homeless people could be trapped inside, and firefighters arrived to find a vacant garage burned.

"They go to a lot of these vacant structures, whether it be garages or residential structures,” said Buchanon.

“I was called by a friend of mine, a real close friend of mine saying there was something going on in my backyard basically, so I came to the backyard and seen it engulfed,” said Bentley.

Thankfully the fire didn’t spread to her garage right across the alley, but she says she knows how those flames likely started.

"There have been several known people that have been sleeping in there."

Bentley says she sees a lot of random fires with so many abandoned properties nearby and she hopes squatters don’t catch her property on fire next.

Firefighters say in cases like these, without hard evidence, there’s not really anyway to investigate the ignition further. But if you have a detached garage or second property used for storage, be sure to  check it throughout the winter and make sure someone isn’t calling it home.