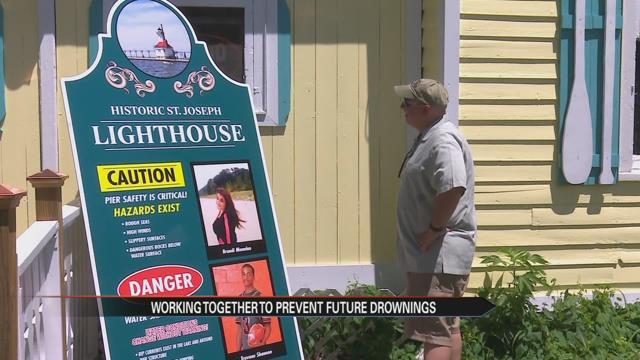 The St. Joseph, MI man who designed a sign to prevent drownings is pairing up with two mothers of recent drowning victims to make a difference.

“If it saves someone else, you know, I’m all for that,” Beth Mannino said. “I don’t want another family going through this.”

“This is really like honoring my son, [so] that his story is not just gonna be forgotten, it’s gonna keep going on,” Tonya Towns said.

Mannino and Towns are two mothers in mourning, hoping a sign will help make a difference.

“I believe having a visual aid down [by the pier] will help,” Mannino said.

So the mothers have agreed to feature photos of their lost children on a sign.

“I’m hoping everyone will look at the fact that people have lost their child and their aunts, uncles, brothers, cousins, whatever, to the pier, and just say, ‘Hey, like, that could be me,’” Towns said.

St. Joe resident Chris Siriano thought up the sign out of frustration – sick of watching drownings take place in his backyard.

Now that the sign is built, Siriano is working to collect the names of every person who has drowned off the pier; hoping to memorialize them on the back of the sign and teach a lesson.

“It’s exciting to feel like maybe we’ll save a life, or several lives; that’s just huge,” he said.

His feeling is shared by Mannino and Towns.

“It scares me and frightens me that other people are still [jumping off the pier] and they’re not looking at the fact that that could be you next,” Towns said.

“It’s a beautiful place,” Mannino said of Silver Beach. “And hopefully people can walk away with memories instead of tragedies.”

Siriano said he hopes to begin a ‘Pier Safety Week’ campaign that would take place in every school in Southwest Michigan.

“One week, the sign will be on loan at each school, hopefully throughout all of Southwest Michigan,” Siriano said. “And during that time we’ll hopefully have video interviews with Coast Guards and people from the sheriff’s department and the dive team just talking about pier safety.”

In the meantime, Siriano is working to get approval from the Army Corps. of Engineers to install his sign on the pier at Silver Beach.

He asks that anyone with ideas for the campaign, connections to local school officials or names for the list of drowning victims contact him via Facebook.