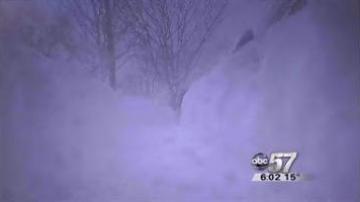 “O-M-G,” 8-year-old Tanner Richmond said this storm was unlike anything any other, “Seriously, I’ve never seen it snow like this.”

Armed with a small red shovel, Richmond took on the 20-plus inches of snow that piled up in front of his house. “It’s kind of hard, shoveling a whole bunch of snow,” T. Richmond said as he scraped the shovel across the sidewalk.

He and his mom put down salt Friday night, but the snow just piled up. “I really thought that we weren’t going to get very much snow,” Krissa Richmond said, “We haven’t gotten very much snow at all yet.”

A lot of people did not expect to get so much snow, T. Richmond said, “The lady across the street said we wouldn’t get a lot but well, look at this place!”

The snow painted the city white, streets, sidewalks, driveways, even cars were all hidden underneath. “My car is a bit buried,” K. Richmond said, “We probably got a good foot of snow here.”

The snow continued to fall into the afternoon but most of it dumped down overnight. When most people went to sleep there was no snow on the ground but woke up Friday morning snowed in. “Yea, just holy cow,” Forest Burczak said he could not believe how fast the snow piled up, “When I woke up it was just already solid snow.”

Burczak spent more than three hours outside with his mom, digging their way out from under the snow.

“At first we tried the snow blower, but there is just too much snow,” Burczak said, “So we had to switch to shovels.” Snow blowers roared and shovels scraped down streets and up driveways throughout the city. While some said this is the kind of weather they had been waiting for, Burczak said he’s already over the snow, “I wish it didn’t come, I’d be fine with no snow.”

T. Richmond said he did wish for a white winter but this is just too much, now he wants the snow do disappear as quickly as it came. Shoveling heaps of snow more than 20 inches tall, the 8-year-old said he doesn’t even like snow anymore, “Not as much as I did, because right now my toes are freezing.”