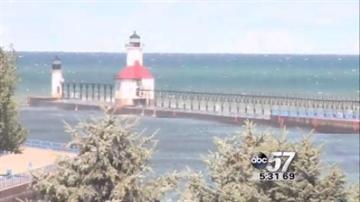 ST. JOSEPH, Mich. --After 100 years of ownership, the government is ready to hand over ownership of the St. Joseph, Michigan lighthouse to the city. Owning the lighthouse would mean the city has to come up with over a million dollars to restore and maintain it.

One of the most cherished symbols of St. Joseph is the lighthouse.

"It's a local, regional, and hopefully national icon so it's something that is very important to the community," said St. Joseph Mayor Robert Judd.

For more than 100 years it has been federally owned, but the government is handing the lighthouse over to the local government - with limitations.

"We have to maintain the historic nature of the lighthouse, we have to preserve it as it is. It cannot be used for commercial purposes. We have to use it for education and we have to let them put the lights on the lighthouse if they continue to want to use them," said Judd.

It also includes help from the Coast Guard to make sure it's still a functioning lighthouse.

On Monday, the City Commission will consider accepting the deed to the lighthouse. If the city accepts the deed, it will become the city's responsibility to preserve it.

"The city commission seems to feel that this is important to the community, that the lighthouse is an essential symbol to the community, and it's really iconic so we wanted to make sure that it is preserved," said John Hodgson, Community Development Director.

The city will have to come up with $1.8 million to restore and preserve the lighthouse. The city hopes residents will step up and donate to the cause.

The city will also look at grants and other sources of funding for the restoration.