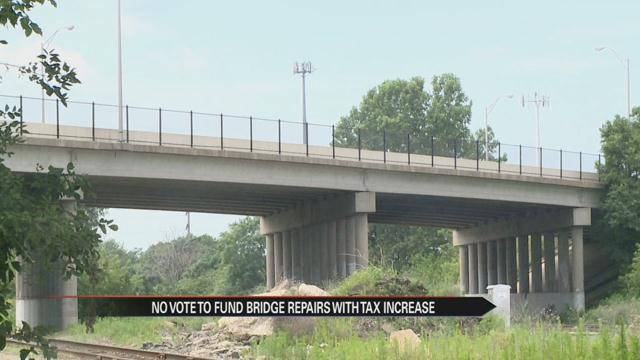 The St. Joseph County Auditor asked for a tax increase Tuesday to go towards bridge repairs, but it was rejected.

The auditor says the debate isn’t over.

“We can say no to doing something about this now, but eventually, we’re going to have to do something. We can’t keep kicking the can down the road,” Auditor Mike Hamann said.

An example is the bridge at Sample Street and Olive Street in South Bend.

Hamann has asked the commissioners to approve a plan that would raise taxes for property owners to allocate funds for large bridges.

The increases cap at an extra $15 per year for some taxpayers.

The commissioners unanimously voted against it Tuesday.

“We thought it was inappropriate at this time to answer to a tax increase for the citizens of St. Joe County,” Commissioner Andy Kostielney said.

“Right now we’re hoping we can find some other methods to pay for our large bridge needs,” Kostielney said.

His alternative ideas include partnering with cities to find funds.

The commissioners also put bridge research in some upcoming plans, and approved a relocation of some funds for smaller bridge upkeep.

In the meantime, funds for larger bridges will be taken out of the general fund, usually reserved for other projects.

He says refusal to do so could lead to a financial, or worse, public safety crisis.

"It’s not only an inconvenience for folks it can be a public safety issue too,” Hamann said.