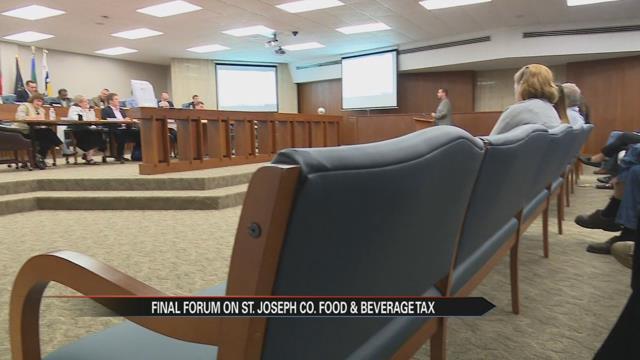 The final forum on the future of a proposed food and beverage tax saw mixed reaction from St. Joseph County taxpayers.

“What is this one percent increase even funding?” questioned one resident at the podium.

“How do we allocate fairly?” asked another.

Those candid concerns were familiar to the joint exploratory board as Wednesday was the third public meeting on the tax.

But there was also support.

“I’m here tonight on behalf of the zoo to voice our support on the food and beverage tax,” said one resident.

The audience was split with many wearing stickers that said “I love the zoo” while others read “No F&B Tax.”

The three councils, Mishawka, South Bend and St. Joseph County recognize this challenge before the community.

“We need to make sure that they are included in helping to shape whatever direction we need to go,” said Oliver Davis, South Bend Common Council Vice President.

For months, this community explored a tax that would affect diners, but the payoff would be worth it.

“There are different things that we can do, we could all use some help with our parks and sooner or later we need to address that as the fiscal cliff comes,” said Ron Banicki, Mishawaka Common Council President.

The Potowatomi Park is also asking for the help of this tax.

But it wouldn’t be the sole benefactor.

Parts of these meetings have been to see what other uses can come out of the increase in revenue.

“We need to look at a possible draft, if you will, on where the other 75 percent would go and that’s assuming that the other 25 would go to the zoo,” said Rafael Morton, St. Joseph County Commission President.

But still the fate of this tax will lie in the hands of other elected officials downstate.

“What we have to go through to even get approval from the state, which from my understanding, is a very tedious process,” Morton.

The three councils will meet individually to discuss whether or not they will make a resolution in favor of the tax.

The board would like to get the feedback from both cities' mayors and county commissioners before a decision is made.