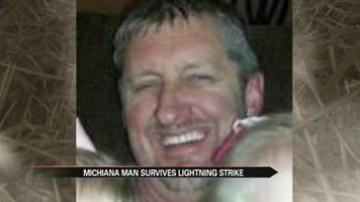 ST. JOSEPH COUNTY, Ind. -- A St. Joseph County man was struck by lightning in the 1900 block of New Road Tuesday morning. When emergency responders arrived, the victim was on the ground complaining of head and shoulder pain.

Phil Shafer was outside hauling hay in a tractor when he was struck by lightning.

"He said it just felt like it hit him in the head with a sledgehammer," said Paul Shafer, Phil's dad.

Paul drove up just in time to see Phil collapse.

"He didn't have any burns they could see, but they said it head was hurting and his shoulders were burning," said Paul.

On average, Indiana has about 500,000 lightning strikes per year, which is why Bobos recommends heading inside when you hear thunder.

"You don't want to be stuck outside, you want to take the precautions beforehand and have the tools to know when things are coming before they get there," said Bobos.

Paul says he was struck by lightning 30 years ago. He said he learned the hard way Mother Nature is supreme.

"Don't play in the water when there's lightning," said Paul.

Phil has since been released from the hospital.

Experts recommend avoiding tall objects like trees or construction equipment if you're stuck outside during a thunderstorm.

Of the twenty people that have died this year, over half were outside working.

Click here for more information about staying safe in a thunderstorm