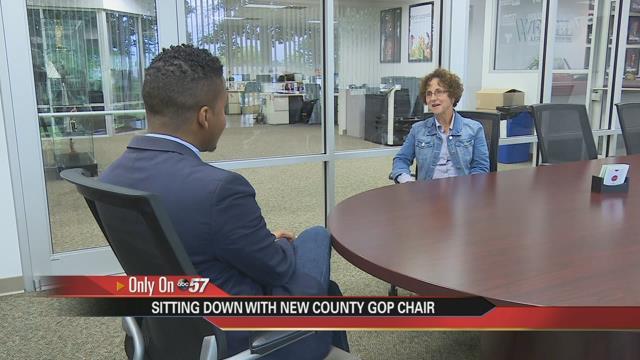 Lynn Fitzpatrick says she’s working on unifying the party, especially considering there are less than 40 days left until Election Day.

Increasing Republican membership would be the next tough task on the docket.

“It’s tough, it’s very tough, and a lot of times people don’t want to spend the time and the money to try and do it,” said Fitzpatrick.

Getting voters to the polls is one thing.

But in St. Joseph County, getting voters to make the switch can sometimes be a challenge.

“I think that if your message is clear, and you articulated well enough and loud enough, then people will cross over, absolutely, and they will vote for a republican,” she said.

Fitzpatrick was elected to lead the party last week, replacing Roy Saenz a month after he stepped down.

“With the election so close and the timing, it just seemed like the best thing to do was to continue to serve and to make sure that things kept going,” said Fitzpatrick.

Fitzpatrick also weighed in on the controversy regarding a Republican judge candidate’s behavior at the 4-H fair.

She says the party is focused on supporting appropriate and ethical behavior.

“I try not to throw stones, I try not to judge too harshly and I don’t think any of us should,” she said.

She looks forward to growing membership for the party.

“Maybe care more about respecting the other person and seeking the truth and understanding what really works, then we can compromise and find a solution,” she said.