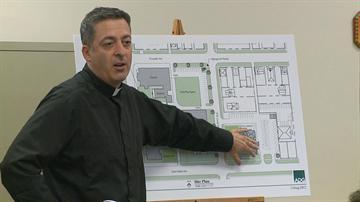 SOUTH BEND, Ind. – The plans for a $4-million expansion of the St. Joseph Grade School campus are stirring some debate between the school and nearby businesses.

At a community meeting on Tuesday, school officials displayed sketches of the plans to beautify and expand the campus.  The school has already purchased the Family Justice Center Building at the intersection of Colfax and St. Louis and will renovate that building to house parish offices and a new preschool.  The current parish offices will be torn down to make way for new buildings that will include more classrooms and a gym.

While everyone at Tuesday’s meeting agreed the expansion was great news for the school, some nearby businesses opposed the planned location of a new parking lot for teachers.  The school is hoping to buy an empty lot northwest of the intersection of Colfax and Hill to turn into a parking lot.  The school’s current parking lot, which also serves as a playground, would be torn-up and made into a green space for students to play on.

"Currently we only really have allocated for that a small dirt lot," Father DeRiso described.  “We would love to be able to have space that they could play on and also that would be part of our beautification effort for our campus and the community.”

But, business owners say the lot is a prime piece of real estate that would be wasted if it was made into a parking lot.  Shop owners have been hoping to bring in more businesses to turn the East Bank Village into a retail destination.

"Our issue as a neighborhood here is that lot is really important to the density of retail and business in the area and that lot is really the only option we have," Susan Bennett said at the meeting.  "You guys have a lot more options."

DeRiso explained that the planned parking lot is their only option.  Other possible locations are either too small or too far away to provide safety and accessibility to teachers.  He said if the lot at Colfax and Hill isn’t turned into a parking lot the school will have to scrap its plans to put in the green space play area.

"We understand and believe in businesses thriving in this community,” DeRiso explained.  “We certainly wouldn't see this as somehow compromising that from happening."

The school hasn’t set a date for the start of construction on the expansion and is instead waiting to work with the City of South Bend on coming to an agreement about the proposed parking lot.