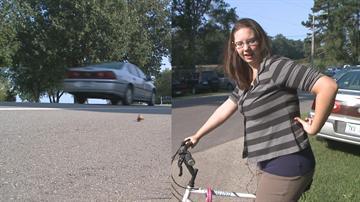 ST. JOSEPH, Mich. – Two things stick with 26-year-old Amy Sweet from the accident; the injury she is still nursing and the feeling of being violated.

“That person has no clue what happened to me,” Sweet told ABC 57 News. “I could be dead somewhere and that bothers me. They didn’t even stop.”

For more than a month Michigan State Police have been looking for the driver that slammed into Sweet while she was biking on Lakeshore Drive in Saint Joseph. Now police believe the driver could be connected to another hit-and-run on the same road.

On July 23rd Sweet was biking on Lakeshore Drive near Hawthorne Street. Around 6:15 p.m. she was side-swiped by a vehicle from behind and didn’t see it coming. “They think the person’s passenger side mirror hit my back,” she said.

Sweet suffered a dislocated knee but was able to catch a glimpse of the car and two other cars following behind. “Maybe they didn’t notice but nobody stopped.”

According to MSP, just before her accident another biker reported being hit by an object coming from a car with the same description.

“I gave the person the benefit of the doubt that maybe it was an accident and they just didn’t stop,” Sweet said. “But if they hit somebody else it makes me think they were doing something they shouldn’t have been doing (like) texting (or) drinking or they were doing it on purpose.”

Police are looking for the vehicle. It is a black or dark blue Honda with Michigan license plates displaying the letters ‘C’ and “L’. The car possibly has damage to its passenger-side mirror.