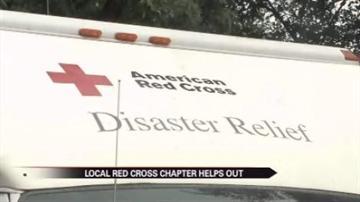 SOUTH BEND, Ind. --Red Cross volunteers all over the country and in Michiana are gearing up to offer aid to the victims of the Oklahoma tornadoes.

As a national tragedy continues to unfold right in front of Michiana’s eyes, the St. Joseph County Red Cross is beginning to step into action.

Emergency services coordinator Doug Farmwald says first responders and the Red Cross in Oklahoma are surveying how much damage there is.

He is waiting to find out how many of his volunteers they will need.

“So far all we know is that a major tornado has hit near Oklahoma City and that it has done extensive damage,” said Farmwald.

But Farmwald says when he is contacted, his team will be ready.

He has already had six volunteers call to tell him they are ready to be deployed to Oklahoma.

The St Joseph Red Cross has a team of trained volunteers that are no stranger to natural disasters.

“Sandy at one point, we had over 7,000 volunteers nationally and 50 from right here in St Joseph County,” said Farmwald.

But he says giving aid during devastation like this is no easy task.

“I was also in Joplin for that tornado and it literally left you speechless. You walked over a hill and there was nothing over three feet high,” said Farmwald.

If you would like to help the victims of the Oklahoma tornado, Farmwald says to visit the American Red Cross website.