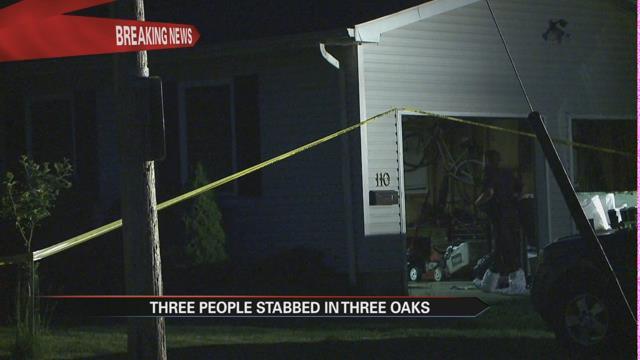 Law enforcement officers responded to a call about a stabbing at a home in the 100 block of Poplar Street in Three Oaks early Saturday morning.

They were on scene well into the daylight hours of the morning to piece together exactly what happened.

“At about 3 in the morning we received a call from a victim who fled the house and we responded to the scene,” said Adam Umbrasas, Village Manager.

The three victims are a mother and father, and a child.

“There's three victims, it's an internal family issue and we have the suspect in custody. At this point we don't really know what the situation is that caused it. We do have detectives from Berrien County interviewing everyone we possibly can to figure out exactly what really transpired,” Umbrasas said.

The suspect is 26-year-old, Kevin Cain from Hobart, Indiana.

All three victims were taken to the hospital, one was stable and the other two were listed in critical condition.

Cain is being charged with three counts of attempted murder.

Three Oaks is a small, close-knit community and Umbrasas said things like this do not happen often.

“This is very uncommon to happen in Three Oaks. This is our sleepy little hollow, and everyone is kind of shaken up about it,” Umbrasas added.

At this time the names of the victims involved have not been released.