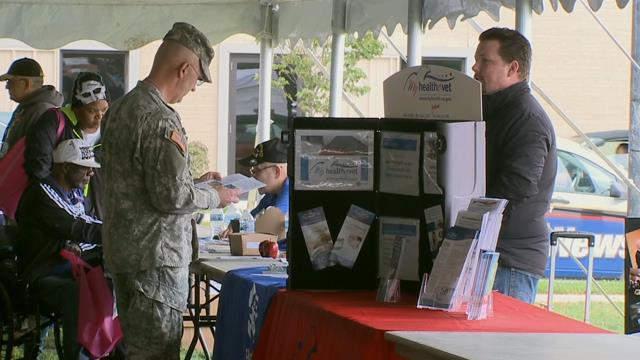 Michiana community partners hosted a military stand down to stand up and support returning and homeless veterans from all over Michiana Wednesday. One veteran explained how events like this have helped him.

Elmore Salter and other veterans in Michiana braved the chilly weather for a stand down event in South Bend.

“Every year we have this, we find less street homeless veterans which is good because we’re trying to house them,” Naomi Nicastro, Homeless Coordinator for the Northern Indiana V.A.

During war, stand down meant a brief break from combat. Troops took a moment for rest, showers, warm meals and fellowship.

“United States Marines and I was a Combat Engineer,” said Salter.

He became homeless after returning but says he got help with that from efforts like this.

“It’s benefits over there that I didn’t know veterans were entitled to. And it’s a good way for veterans to find out you know things for housing, they got housing and all types of medical and dental,” said Salter.

Salter also had a personal message for his fellow veterans here in Michiana.

“Check with your local VA office. Try to find out, you know, what you are entitled to. If you don’t open your mouth, you know, like they say, a closed mouth never gets fed. So seek knowledge, seek your nearest V.A. office because it’s a lot of benefits out there that we don’t know about,” said Salter.