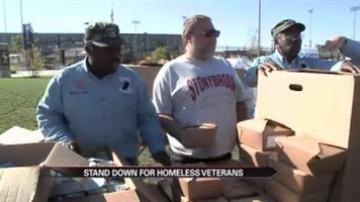 SOUTH BEND, Ind. -- As the government shutdown continues, services offered to veterans are being threatened. The city of South Bend decided to honor vets and show them what they mean to the community.

The Michiana Military Stand Down for Homeless Veterans was held at Coveleski Stadium Thursday.

The stand down is a Vietnam War-era concept. The first stand down for homeless vets was held in San Diego in 1988 and they have been held all over the country.

Thursday's stand down in South Bend was the first one for the city.

As a Marine, Elmore Salter, called Moe by his friends, served in a peacekeeping mission in Beirut from February to August 1984 - just months after the bombing of Beirut in the fall of 1983.

"We flew in every morning on Hilo-craft, and we flew back in the evening. Mortar rounds and stuff would fly over our heads sometimes," said Salter.

After his tour was over, Salter hung up his uniform, but couldn't put down the bottle.

He became an alcoholic while in the corps and it cost him just about everything.

"I've been homeless a while. Been a struggle," said Salter.

A struggle that he has not had to bear alone.

"Been sober now for almost two years. I hadn't touched nothing to drink since I moved into the Veterans Center," said Salter.

The man who runs the Veteran's Center, retired Lieutenant Colonel Kent Laudeman, helped organize the Stand Down for Homeless Veterans in South Bend.

"I am just truly impressed with the service people that have come together to make this day the first day for the stand down," said Laudeman.

Even though the event was aimed at homeless veterans, no vet was turned away.

In our nation's capitol, a political battle rages that threatens to interfere with vital government services including those offered to veterans.

"As distressing as those politics are, we know that those politics do not have to determine what kind of a community we are," said South Bend Mayor Pete Buttigieg.

They were also given information about services they qualify for that could help them get back on their feet.

Right there, serving his community as he did 30 years ago, was Moe Salter.

"I just volunteer to help out the homeless guys who really need it, because I have access to that stuff where I am staying and it's more important to see the person who doesn't have it come to this and receive it," said Salter.

Thursday's Stand Down was just one of seven being held in northern Indiana.

In just a few weeks, Fort Wayne will hold its 17th annual event.