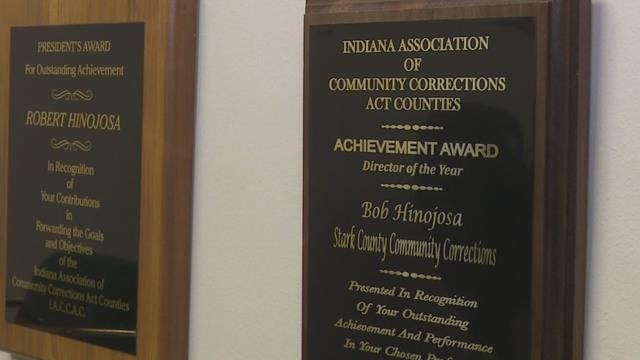 The Director of Starke County Community Corrections has received Indiana’s Director of the Year award, becoming the first person to do so in two counties.

Community Corrections is essentially an alternative to jail and probation. Instead of just locking people up, the judge can connect offenders to a case worker who will help them find resources to get their lives back on track.

“It is about second chances, and our director proved that, you know, by hiring me,” said Amanda Enyart, an ex-offender who know works at SCCC as the Family Community Liaison.

Enyart spent six months in jail after being caught with methamphetamine.

“I had no idea that I was going to be able to turn my story into a story of hope to give somebody, that there is another way,” she said.

“One of the mandates when I was hired is to ensure that services that are needed for many of the program participants are available locally,” said SCCC Director Robert Hinojosa.

Those services include the regional therapeutic community, which provides intensive treatment to addicts instead of just incarceration.

“The DOC does run those programs within some of their prisons around the state, but this is the first time they’ve located at a local jail, so that’s really what’s unique about it,” said Hinojosa.

And that’s one of the many reasons why Jordan Morris nominated Bob Hinojosa for the Indiana Association of Community Corrections Act Counties Director of the Year, which he won in November!

“He believes in giving people another opportunity in providing people with the resources that they need to get their lives back on track and to be successful,” said Morris.

Starke County Community Corrections emphasizes accountability, and one of the ways in which they foster that is with a GPS unit that they attach to participants’ ankles.

“I wanted all the accountability I could have, because I really wanted to live my life differently,” said Enyart.

Holding participants responsible for who they become is what has earned Bob this prestigious award.

“I feel like Bob really has a passion. I feel like he really practices what he preaches, and he believes that people can change,” said Morris.

Since it was established in 2009, Starke County Community Corrections has kept 1400 people from just ending up in the prison system, at least in part thanks to Bob Hinojosa’s leadership.

This is the second time he has been recognized, too. Bob was the director of Lake County Community Corrections for 25 years and won the same award about two decades ago.