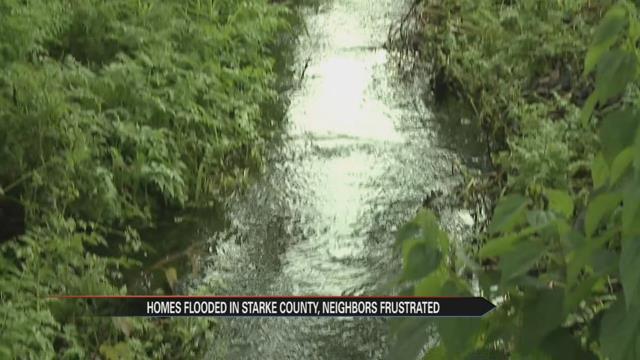 Starke County homeowners have flooding in their homes and say it's because the county is not cleaning overgrown culverts in order for rain water to go to lakes.

The overgrown culverts are full of leaves, branches, and mud. It prevents water from draining into into nearby Bass Lake.

According to Starke County, the last time culverts were cleaned was in 2008.

This frustrates homeowners whose homes are underwater.

“In the last six weeks, I’ve had over a foot of water in my garage and under my kitchen and bathroom. I’ve got pumps running in the front drain. I’ve got a pump in the backyard running it out to the street, and just constant fans and dehumidifiers. It’s a nightmare,” says Boa Shores homeowner Tony Russo.

While the water is taking its toll on his home, his wife’s health is also taking a hit.

“The first time it flooded, she got a lung infection from all of the stuff coming up from underneath the house. Now she’s sick again,” says Russo.

Others in the Boa Shores neighborhood say there is a simple solution to flooding issues: cleaning out all overgrown culverts.

According to Boa Shores Homeowner’s Association President Guy Tardi, neighbors pay an annual ditch fee of $10 for Starke County to come clean out the culverts.

“No one seems to answer our questions or anyone’s questions when we call and see why our ditches aren’t being taken care of.  We got people who are losing thousands upon thousands of dollars worth of furniture and materials from their homes,” says Tardi.

According to Starke County officials, they have surveyed the county and say the culverts are flowing well.

They say the Boa Shores neighborhood has a naturally high water level.